Thanks to the Wild Deserts team, a locally extinct species is translocated from Western Australia and reintroduced into Sturt National Park. 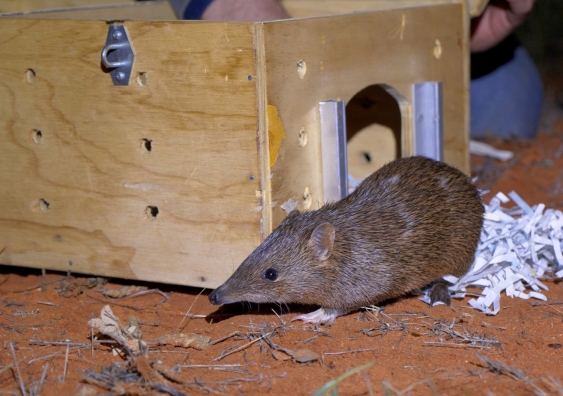 The golden bandicoots were released after dark into one of the Wild Desert exclosures. Photo: Supplied.

Golden bandicoots have returned to the Strzelecki Desert in far-west NSW after a 100-year absence thanks to the Wild Deserts team, a partnership between UNSW Sydney scientists and NSW National Parks and Wildlife Service.

Up to 40 golden bandicoots Isoodon auratus were returned to Sturt National Park in May 2022. These golden-brown guinea pig sized bandicoots shelter in thick shrubs and spinifex, playing an important role in the desert ecosystem. Golden bandicoots dig for their food, such as seeds, insects, tubers and fungi, and so turn over the soil, helping with nutrient cycling and plant growth.

“These golden bandicoots are ecosystem engineers and their absence from the desert ecosystem has definitely been missed,” said Wild Deserts Principal Ecologist, Dr Rebecca West. “They also capitalise on good conditions and are able to breed throughout the year.”

Read more: The most remote family in NSW are on a mission. It could change the desert as we know it

The golden bandicoots were translocated from a feral-predator exclosure area in the Matuwa Kurrara Kurrara Indigenous Protected Area, a reserve located in the central Western Australian desert on Martu Country.

“Their golden bandicoots are doing really well, in a similar desert environment to Sturt National Park,” said Dr West. “We engaged early on with the Traditional Owners of Matuwa (Tarlka Matuwa Piarku Aboriginal Corporation (TMPAC)), when planning this translocation, gaining their support. We have also worked closely with our colleagues from the WA Department of Biodiversity Conservation and Attractions to organise the logistics around this translocation.”

The journey from Matuwa to Wild Deserts was a long one, almost 2000 kilometres and a full day of flying in a charter plane.

The Sturt National Park project is part of the NSW Government's $40 million feral predator-free area partnerships project, which is returning at least 13 mammal species currently extinct in NSW back into the wild.

NSW Minister for the Environment James Griffin said the latest release of the golden bandicoots into Sturt National Park means nine mammal species previously unseen in NSW national parks for about a century are now back where they belong.

“These golden bandicoots are the ninth extinct species that we have rewilded in a NSW national park, which is a major milestone in our work to turn back the tide of extinctions in this state.

“It’s incredible that just three years after the NSW Government reintroduced the first mammal in our feral-free areas, we already have nine species that were previously extinct in NSW returned to national parks.” 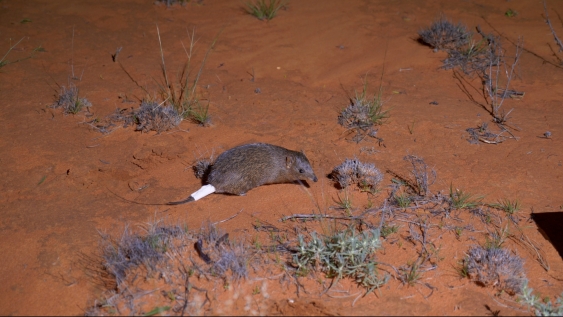 A 2-gram radio transmitter is attached to the tail of each bandicoot so they can be monitored after release. Photo: Supplied.

Wild Deserts in Sturt National Park has created one of the largest feral-free areas in Australia, constructing two 2000-hectare specialised fenced reserves from which all feral species have been removed and grazing pressure reduced.

“Thanks to museum specimens and sub-fossil records, we know the golden bandicoot used to live here in Sturt National Park, but they have been locally extinct for over 100 years,” said Dr Reece Pedler, Wild Deserts Project Co-ordinator.

“Feral cats, foxes, rabbits and changes to grazing pressure drove them to extinction. Now these have gone we have a great opportunity to bring them back.”

“The excellent rainfall over the past two years has really brought the desert to life, providing fantastic resources for golden bandicoots to settle in, coming from their home in the west,” Dr West said. 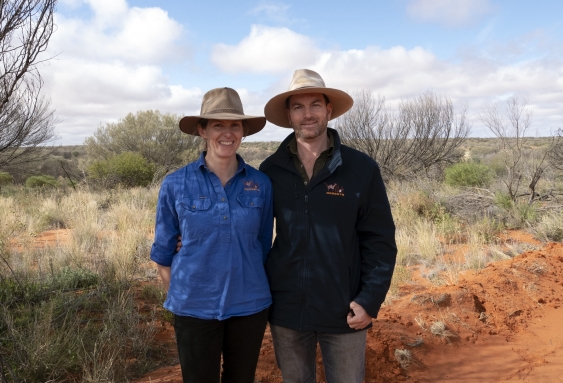 Dr Dorian Moro, TMPAC Environment Manager Matuwa, said, “Matuwa is an important place for Wiluna Martu for both cultural and ecological reasons. The Wiluna Martu Rangers are proud to see healthy animals from their Country shared with the Traditional Owners elsewhere in Australia”.

The bandicoots were accompanied on their journey by two TMPAC Wiluna Martu Rangers who assisted scientists to trap the bandicoots at Matuwa and deliver them to Wild Deserts. Wongkumara and Maljangapa representatives, the Traditional Owners of the land of Sturt National Park, welcomed the Wiluna Martu Rangers and the golden bandicoots to their Country. The translocation was an important opportunity for cultural connection and exchange between these Traditional Owner groups. The golden bandicoot was a significant species to Wongkumara and Maljangapa peoples, and this translocation fulfils ambitions to return them back to their Country.

The arrival of the fourth locally extinct species to Wild Deserts is another milestone in restoring the desert.

“It’s so exciting to see the return of another building block in the food web that is restoring this desert at Sturt National Park, as well as contributing to saving the species,” said Professor Richard Kingsford, Wild Deserts Project Leader. “Also, one of our key goals is to connect traditional custodians of this Country, and this cross-cultural translocation really encapsulates this.”

The golden bandicoots were released after dark into one of the Wild Deserts exclosures.

“We use breathable tape to attach a 2-gram radio transmitter to the tail of each bandicoot so we can monitor them after release,” Dr West said. “This will give us some really important information on how the bandicoots are settling in over the next two months.”