Sir Michael Hintze has honoured his father with the unveiling of a new lecture theatre at UNSW made possible by a $1 million donation. 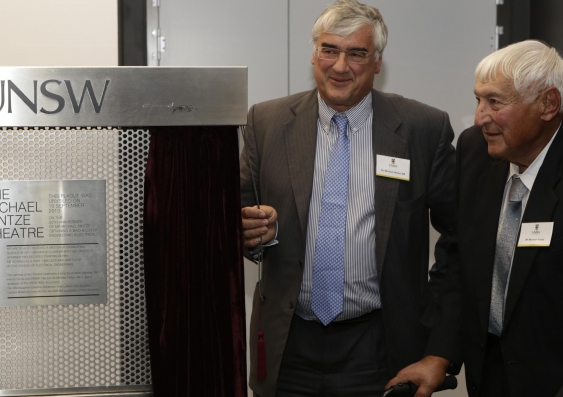 Sir Michael Hintze with his father

Sir Michael Hintze has honoured his father with the unveiling of a new lecture theatre at UNSW made possible by a $1 million donation from the Hintze Family Charitable Foundation.

Sir Michael made the $1 million gift in honour of his father, Michael Hintze senior. Both men are UNSW alumni.

Located in UNSW’s Tyree Energy Technologies Building, the theatre was unveiled during a ceremony this week attended by the Hintze family, their friends and UNSW colleagues, including UNSW Chancellor David Gonski and former Prime Minister Paul Keating.

This year marks 50 years since Mr Hintze senior graduated from UNSW as an Electrical Engineer.

Sir Michael said he was privileged to be able to honour his father through the donation and the theatre naming. 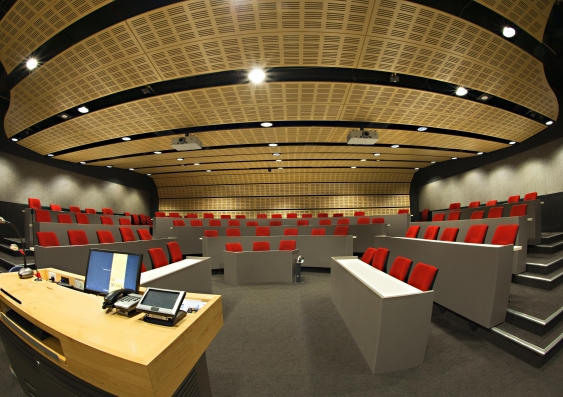 One of Australia’s most successful global hedge fund entrepreneurs, Sir Michael is the founder and Chief Executive of CQS, a global asset management firm. He is also portfolio manager at the CQS Directional Opportunities Fund, ranked by Bloomberg at number three on its list of the 100 top-performing hedge funds.

Sir Michael said he and his wife Dorothy had been able to support many charities through the Hintze Family Charitable Foundation. While they have supported a number of leading universities around the world, UNSW held a special place in their hearts, he said.

Sir Michael holds two Bachelor degrees from the University of Sydney, an MBA from Harvard, and a Master of Science, and a Doctor of Business honoris causa, all from UNSW.

Sir Michael said his family had been “warmly embraced by Australia and had been very fortunate” after arriving in Sydney from China as ethnic Russian refugees.

During his time living in the United Kingdom, Sir Michael was named as the UK’s “Australian of the Year” and was Knighted this year in recognition of his substantial charitable contributions to the arts.

One of the joys of having money, Sir Michael said, was being able to give it away in the support of others in need. Sir Michael said his early years instilled in him a sense of duty, a desire, a will and an obligation to give back wherever it was reasonably possible to do so. He felt an obligation to return something to society and especially to those people, places and institutions that have helped to shape him through his life.

Family friend, former Prime Minister Paul Keating was a surprise guest at the unveiling. He spoke about his friendship with Mr Hintze senior and recalled their days working as young men at the Sydney County Council, where Mr Keating was a clerk. 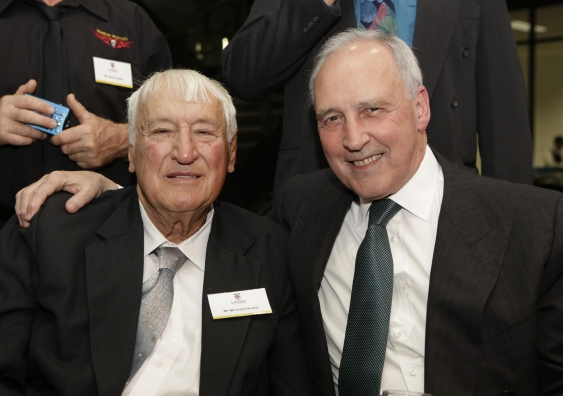 In thanking the Hintze family for its generous donation, UNSW Chancellor Mr David Gonski said Sir Michael was a wonderful example of someone using their success for the betterment of others.

“The support we receive from alumni assists us in our endeavours to build a culture of philanthropy among our graduate community, government and industry,” he said.

Mr Gonski noted he and Sir Michael shared a similar family honour: The Gonski Room in the John Niland Scientia Building is named after Mr Gonski’s father, Alexander, who once taught at UNSW.