Associate Professor Sarah Brough wants to know how time has shaped our galaxies – and she is a gender equity champion for the next generation of astronomers. 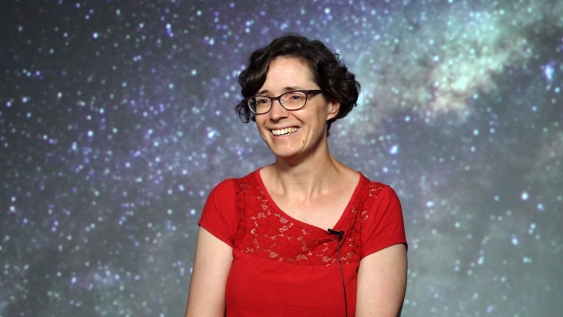 As an observational astronomer, Associate Professor Sarah Brough looks to the stars for answers – but that wasn’t always crystal clear.

After completing an undergraduate degree in Physics, A/Prof Brough spent a year travelling and working, uncertain of what to do next.

It was a New Scientist article that pulled her back into the trajectory of scientific research and astronomy.  The article was about an amazing new discovery, exploring how the universe was not only expanding, but swelling at an accelerating rate, an unknown force pushing it apart.

The work was jointly led by Astrophysicist Professor Brian Schmidt, who would go on to be awarded the 2011 Nobel prize for this work. He is now the Vice Chancellor at Australian National University.

This would be the catalyst to A/Prof Brough embarking onto the path to research.

“I found myself missing my identity as a scientist,” says A/Prof Brough.

“I remember just being really excited by the idea I could study really big galaxies.”

A/Prof Brough is particularly interested in what changes the shape of a galaxy over time. For instance, how did the Milky Way galaxy, home to our own solar system, evolve to get its distinctive beautiful spiral arms?

The pursuit of such an answer has taken A/Prof Brough to observatories around the world, as a key member of three major Australian-led surveys of galaxies. She has visited telescopes at observatories including one next to the Warrumbungle National Park in Australia and one more than two kilometres above sea level in the Canary Islands.

“It is about having those conversations more openly and having that top-down leadership.”

Telescopes are like glasses for our eyes to see the night sky – they are designed to collect different frequencies of light, making it possible for astronomers to study celestial bodies in space, such as stars and galaxies.

To A/Prof Brough, telescopes are like time machines that allow her to travel back in time to study the evolution of galaxies.

This is because of the speed at which light travels: it takes 8 minutes for the light of the Sun to reach Earth. Proxima Centauri, the closest star other than the Sun, is 4.5 light years away from Earth. Whenever we peer at Proxima Centauri through a telescope, we are looking at light of a star that began its journey to Earth 4.5 years ago.

By collecting that distant light, powerful telescopes can capture an image of what a galaxy looked like billions of years ago. It is possible to look further into deep space, and so further back in time.

But how far back in time are we talking? A/Prof Brough wants to look all the way back to the Big Bang 13.8 billion years ago. By piecing together these images of galaxies, Professor Brough can map the different stages of evolution of galaxies over time, including massive galaxies thousands of times the size of the Milky Way.

“Galaxies do change over time, and this is important because we as human beings are part of this larger picture,” she says.

“We live on Earth, which is part of the solar system which goes around the Sun. The Sun is one star out of billions in the galaxy - that’s our home.”

Leading the way for gender equity in Astronomy

Equal to A/Prof Brough’s passion to unveil the scenes behind the evolution of some of our most massive galaxies is a keen drive to support the next generation of female astronomers in Australia.

Former Chair of the Astronomical Society of Australia’s Inclusion, Diversity and Equity in Astronomy Chapter, A/Prof Brough founded the first Australian Women in Astronomy workshop in 2011 to establish leadership support networks among women in the field.

“It is about having those conversations more openly and having that top-down leadership.”

Her dedication for a greater voice for women in astronomy resulted in Australian Astronomy Limited, a major non-profit company, deciding that their committees should consist of at least 30% women, to ensure that those women joining the committees would feel comfortable bringing their opinions.

“It is keeping that feeling of fundamental wonderment alive - we as a society value that understanding and curiosity about the universe.”

“That was amazing, because it opens up all of those doors to give women both a voice but also opportunities to progress,” says A/Prof Brough.

In 2015, A/Prof Brough was selected to be in the Homeward Bound leadership program. The program brings together future female leaders in STEMM and empowers them with skills to impact policy and decision-making – culminating in a 3-week expedition to Antarctica in December 2016.

“It was incredibly valuable to understand more about leadership and recognise my own personal strengths and values,” says A/Prof Brough.

These days, A/Prof Brough is leading Australia into a new astronomical survey of the southern sky.

The Cerro Pachón ridge in north-central Chile will soon be home to a new telescope that will be able to survey the whole Southern Hemisphere sky in just three days.

When it comes to telescopes, the bigger the telescope, the more powerful it is.  The 8.4-meter Large Synoptic Survey Telescope (LSST) is designed with mirrors which can be controlled so it is possible to take wide pictures of the night sky clearly. The goal is for the LSST project to take 800 separate images of each region of the night sky over 10 years.

Locked within those images are new data, opening up exciting new possibilities in astronomical research, including mapping the evolution of massive galaxies.

It’s those ‘Aha!’ moments that truly light up research for A/Prof Brough, a feeling she wants to preserve and communicate to the general public.

“It is keeping that feeling of fundamental wonderment alive,” she says.

“We as a society value that understanding and curiosity about the universe.”

A/Prof Brough joined UNSW in 2017 as part of the University’s Strategic Hires and Retention Pathways (SHARP) scheme, an initiative of the UNSW 2025 Strategy to recruit world-class researchers to the University.