A trip to the beach is a perfect opportunity to explore the peculiar properties of some fascinating fluids. 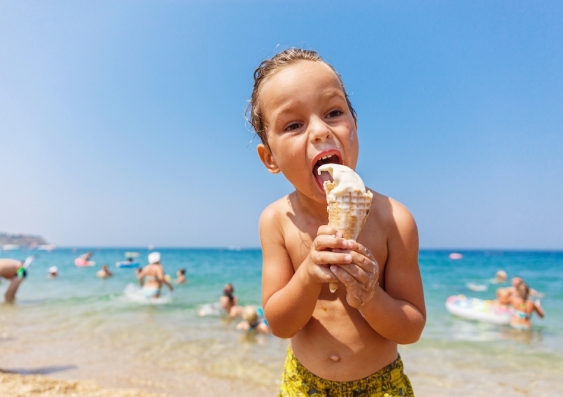 Ahh, summer at the beach! The sun on your face, sand between your toes, an ice cream in your hand.

For scientists young and old, a trip to the beach is also a perfect opportunity to explore the peculiar properties of some fascinating fluids.

Through thick and thin

Take sunscreen. When you first squeeze sunscreen from the bottle, it spreads easily over your skin, providing an even protective layer against the Sun’s rays. But once on your skin, sunscreen gains a thicker consistency – it has higher viscosity – preventing it from dripping off.

Viscosity is the ability of a fluid to keep its shape when a force is applied. Sunscreen is what’s called a shear-thinning fluid, which means rubbing it makes its viscosity decrease so it flows more freely.

This effect typically occurs in fluids containing chain-like molecules called polymers. At rest, the polymers are tangled up in an irregular pattern; but when they are pushed around, they rearrange themselves into layers that slide past each other more easily. 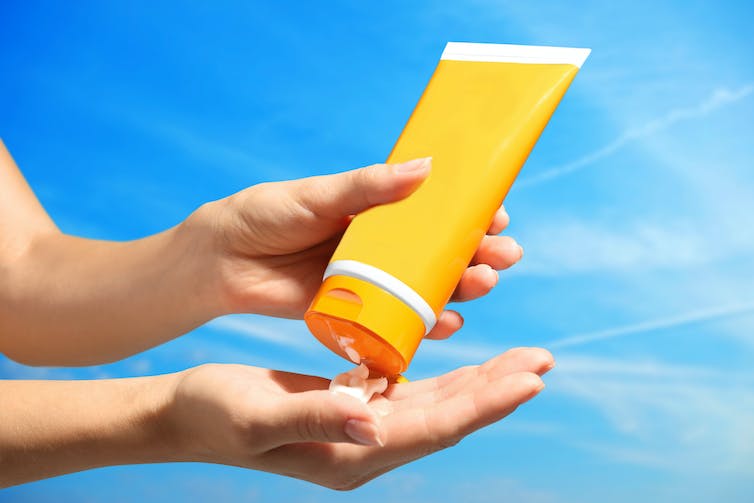 Sunscreen is a ‘shear-thinning fluid’, which means it flows more easily under pressure. Photo: Shutterstock

Shear-thinning fluids are quite common. Ketchup is a classic example: it has high viscosity at rest, making it stick to the sides of the bottle until you shake it so its viscosity decreases and it flows out the nozzle.

When the ketchup lands on your plate, its viscosity increases again so it forms a satisfying dollop. (If this is starting to make your mouth water, you’ll be interested to know that saliva is also a shear-thinning fluid.)

Footprints in the sand

The opposite of a shear-thinning fluid is a shear-thickening fluid, a material whose viscosity increases with applied force.

A familiar example is very wet sand: if you pick up a handful, it will flow between your fingers like grainy custard. When you squeeze it, however, the sand becomes firm and, counter-intuitively, appears dry.

This behaviour, called the wet-sand effect, occurs because the compressive force of your hand pushes apart tiny grains of sand, creating space that lets water drain away from the surface. 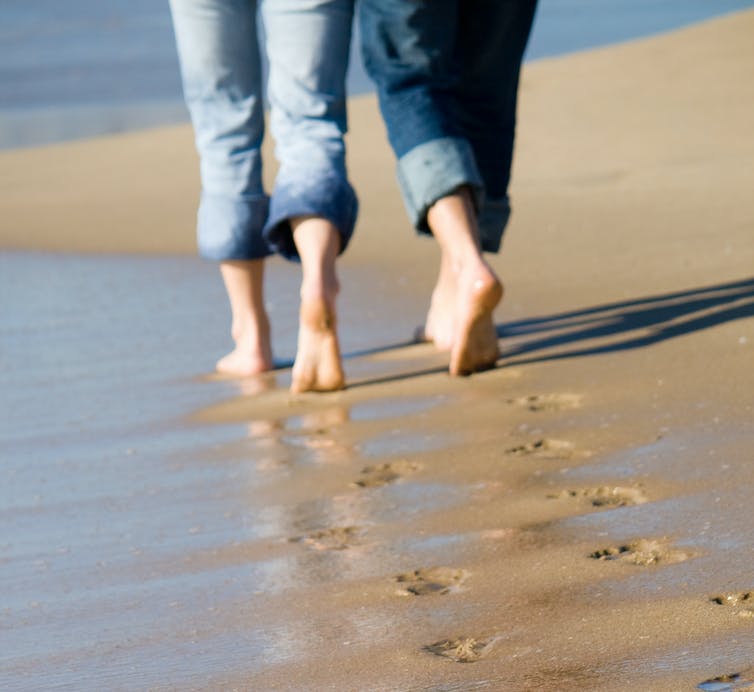 Wet sand is a ‘shear-thickening fluid’: under pressure (like from a footstep) it becomes firmer and less runny. Photo: Shutterstock

The same effect allows you to run on wet sand, producing firm and dry patches where your feet land. But if you stand still and gently wiggle your toes, the wet sand reverts to a liquid state, allowing your feet to sink in – and make a pleasing slurp when you pull them out.

Newton on the beach

Simpler fluids, such as water, have a more or less constant viscosity. These are called Newtonian fluids, after Isaac Newton, who first wrote down the mathematical law to describe them in his famous 1687 book Principia.

To understand viscosity, imagine drinking water through a straw. When you suck, you create lower pressure at the top of the straw than the bottom, drawing water upwards.

The fluid near the walls of the straw experiences friction, so it flows more slowly than fluid near the centre. Newton reasoned the fluid separates into thin layers that slide over each other with a relative speed that depends on the applied force.

The viscosity measures the amount of friction between these different layers. The greater the viscosity (think of a milkshake), the more force you must apply to suck the fluid up the straw.

Newton’s law of viscosity, as it is known, is a mathematical ideal. No real fluid behaves exactly this way, but common fluids like water, alcohol, and vegetable oil come pretty close.

By contrast, non-Newtonian fluids — including shear-thinning and shear-thickening fluids — do not obey Newton’s law of viscosity: their viscosity changes depending on how much force is applied to them.

The scoop on ice cream

Time for some ice cream. Ice cream is a frozen mixture of cream, milk, sugar, and flavourings, but it is the unique behaviour of cream that is responsible for the dribbly joy of really good ice cream.

Cream is peculiar stuff. It is the fat-enriched portion of milk, separated from its watery base.

The resulting emulsion of fat globules and a small amount of liquid gives cream its silkiness. When cream is whisked, the applied force breaks the membranes of the fat globules, which glom together around trapped air, producing a suspension of bubbles and cream: whipped cream. 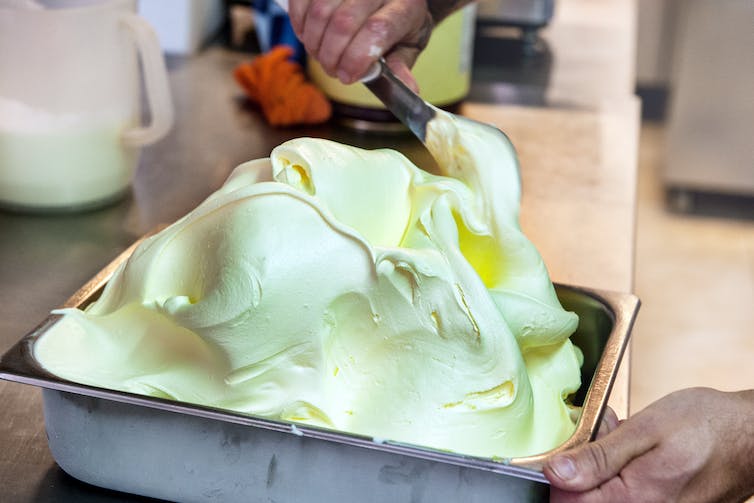 The light, silky texture of ice cream is all due to tiny air bubbles trapped inside little globules of cream. Photo: Shutterstock

Whipped cream is a type of non-Newtonian fluid called a Bingham plastic: at rest, it is semi-solid, forming stiff peaks that are perfect for spooning onto strawberries or scones. But under sufficient force, it can flow like a liquid: through the nozzle of a can of instant whipped cream, for example.

As anyone who has made whipped cream by hand knows, the key ingredient is time. The transformation from liquid to semi-solid is caused by applying force over a period of time.

Air bubbles trapped in the cream give ice cream its pillowy softness. In fact, air can make up to 50% of the total volume of ice cream, which explains why it is less dense than water – and why you can use it to make an ice cream float.

Non-Newtonian fluids are found in all sorts of useful substances from biofuels to body armour to blood plasma, and there is still much about them to discover. As Isaac Newton said:

To myself I seem to have been only like a boy playing on the sea-shore, and diverting myself in now and then finding a smoother pebble or a prettier shell than ordinary, whilst the great ocean of truth lay all undiscovered before me.

What better way to spend a summer day?