UNSW's Creative Robotics Lab and the Fuji Xerox Research Technology Group have developed a social robot designed to promote creativity and collaboration in the workplace. 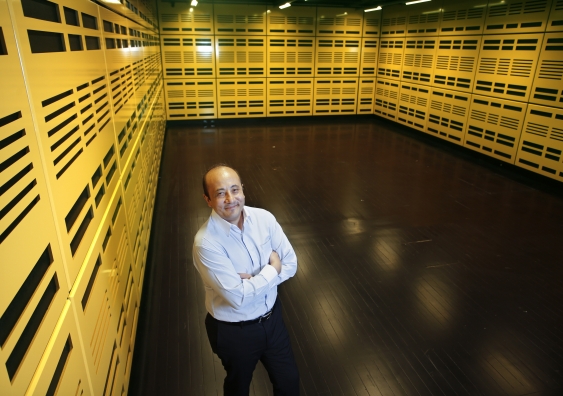 Workers at the  Fuji Xerox R&D Square in Japan are about to welcome a new workmate who will take on many of their mundane tasks and promote collaboration.

But there won’t be any welcome drinks or muffins: the new worker is a robot developed at UNSW Sydney.

The social robot, designed to improve employee experience in the workplace, is part of a three-year collaboration between the UNSW Creative Robotics Lab and the Fuji Xerox Research Technology Group (RTG) in Japan.

The first phase of the project, which is funded by Fuji Xerox, involved preliminary engineering tests at UNSW. In the next phase, the robot will be placed in real-life scenarios to test audience reactions, first at the National Museum of Emerging Science and Innovation in Tokyo then at the Fuji Xerox office.

Data about the interactions will be collected to help further development of the robot.

Roshan Thapliya, Research Senior Manager of the Research and Technology Group at Fuji Xerox, said the new social robot would interact with employees in the workplace and perform administrative and organisational tasks, allowing workers to use their time to create.

The UNSW Social Robotics Lab will work on the design and psychological programming of the robot. Other technical aspects, such as robo-navigation and artificial intelligence, will be developed by the UNSW School of Computer Science in collaboration with Fuji Xerox.

“If you look at an average office worker at the moment, almost 70-80% of their time they are not doing the work they should be doing,” Dr Thapliya said. “They are looking for documents or for the right person to ask about a particular problem.

“We would like a special type of robot that would fit right into the workplace so that people will not be disturbed by its presence but at the same time help them with their tasks.”

The second phase will concentrate on developing technology that will monitor and enhance the employees' wellbeing and facilitate collaboration between colleagues.

Our main goal is to make a companion for humans ... we want to create a heartful robot.

Dr Thapliya and the Director of the Creative Robotics Lab at UNSW, Professor Mari Velonaki, say synchronicity is the key to workplace cooperation, and the robot is designed to facilitate that. They believe that social robots can break down barriers between employees to encourage collaboration.

Professor Velonaki added: “With synchronicity we are looking at a balanced environment. Someone else wants to join a circle because it seems collaborative and the robot can facilitate that.”

Dr Thapliya believes the emotional wellbeing of people in the workplace is vital and that social robots can help in that regard.

“Our main goal is to make a companion for humans… I think one of the differentiators will be understanding the person’s emotional requirements and acting not in a physical way, but in a subtle way that facilitates positive arousal… we want to create a heartful robot,” Dr Thapliya said.

He believes there is even potential for social robots to play a role in reducing social isolation among Japan’s ageing population. 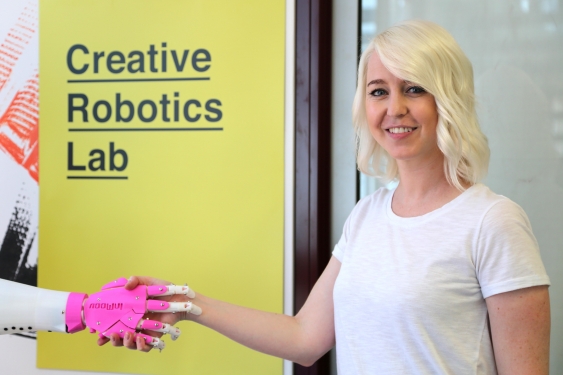 Professor Velonaki and Dr Thapliya are adamant that social robots will not replace people in the workplace. Rather, they will allow workers to collaborate and to use the skill that will be a hallmark of the workplace of the future: creativity.

“We are not interested in building machines that will replace humans, we are interested in creating systems that enhance humans. It is to connect people. It sounds like an oxymoron asking a robot to connect people, but there can be less stigma attached when a physical agent connects people,” Professor Velonaki said.

Dr Thapliya said: “Creativity is the one thing that humans will always be better at than machines, and creative work is what will be required over the next 20 to 30 years. What technology does is it disrupts this linear model into a different model and actually creates more jobs.”

Dr Thapliya acknowledges that the project is ambitious but that is part of its appeal: “If you are really going to create something, you should create something that is really cutting edge. Get to the boundaries and see what it’s like.”

Human-robot interaction in the spotlight