The link between El Niño and heatwaves is complicated. But what we can say is this summer's strong El Niño conditions are likely to bring more heatwaves to much of Australia's north and east, writes Sarah Perkins. 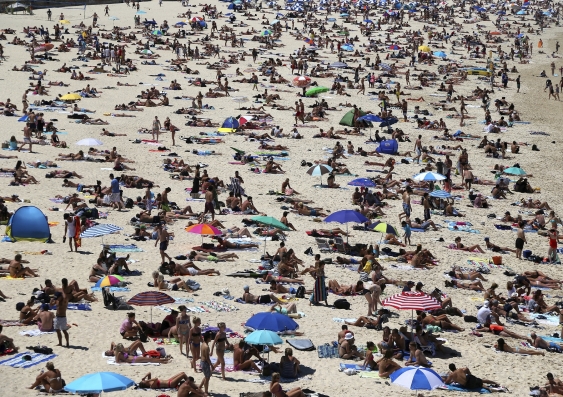 "The odds are that this summer will bring more heatwaves than usual in northern and eastern Australia." Bondi Beach. Photo: iStock

OPINION: The 2015 El Niño is well and truly here. Heat is building in the equatorial Pacific Ocean; subsurface temperatures in the middle of the affected region are more than 6C above average, and the ocean’s surface is warming up too.

In terms of its strength, the current El Niño is comparable with the globally infamous 1997-98 event and is not showing signs of decaying until at least early next year.

El Niños tend to bring drier, hotter conditions to a large part of Australia. But does that also signal an increase in heatwaves? And if so, where?

In a recent study published in the Journal of Geophysical Research, my colleagues and I examined this question. We looked at whether the strength of the El Niño/Southern Oscillation (ENSO) phenomenon could predict the seasonal number of heatwave days, the duration and strength of the biggest heatwaves, and the timing of the start of heatwave season.

We analysed weather records for every Australian heatwave season (November-March) from 1911 to 2012, and compared them to the ENSO conditions (El Niño, La Niña or neutral) for that year. The strength of El Niño or La Niña events was judged using an index that measures the deviation from average Pacific temperatures. Any trend in temperatures was removed to ensure that our results were not confounded by human-induced climate change.

"In terms of its strength, the current El Niño is comparable with the globally infamous 1997-98 event and is not showing signs of decay."

Our results showed that strong El Niños do indeed bring more heatwaves to much of eastern and northern Australia. But the pattern is not the same over the whole country and ENSO is not the only natural culprit in influencing heatwaves. In fact, the story can be quite different depending on where you are - and on what characteristic of a heatwave worries you most.

For eastern and northern Australia, the frequency of heatwaves is closely proportional to the strength of the prevailing ENSO phase: the stronger the El Niño, the more heatwaves occur from November to March.

Also, for pretty much the same regions, significantly more heatwave days occur during El Niño phases than La Niña. On average, there are 8-10 more heatwave days during an El Niño summer than a La Niña one over northern and eastern Australia.

The risk of experiencing a “severe” season for heatwave frequency (defined as a once-in-a-decade summer on present averages) is four times higher during El Niño than La Niña, and twice as likely as during a neutral summer.

While perhaps not completely unexpected, the magnitude of these results shows how brutal an El Niño (such as the one this summer) can be. It can deliver more heatwaves – with adverse impacts on human health, agriculture and ecosystems – to a large chunk of the country.

But while an El Niño can prompt more frequent heatwaves, it doesn’t always make for more punishing ones. Our results showed that El Niño does influence the duration, strength and seasonal start date of heatwaves, but these relationships are not as strong and are limited to Australia’s central east. Moreover, the likelihood of a severe heatwave season based on heatwave intensity and seasonal start date is very similar between neutral and El Niño summers.

"The odds are that this summer will bring more heatwaves than usual in northern and eastern Australia. There is also a chance the heatwave season will start earlier and be more intense."

ENSO wasn’t the only climate phenomenon we looked at. We also repeated our analysis for other patterns of climate variability, in the Indian Ocean (the Indian Ocean Dipole, or IOD) and the Southern Annular Mode (SAM), which is a mid-latitude atmospheric phenomenon involving changing patterns of winds in the southern hemisphere.

The IOD told us little about heatwaves, but for Victoria, Tasmania and parts of South Australia, the prevailing SAM phase is more indicative of heatwave frequency, duration and intensity than ENSO. For these regions, a “positive” SAM phase, of which we have seen a strong one over the past few years, brings high pressure and dry conditions and is linked to more frequent, longer and hotter heatwaves.

We even dug a little deeper, to explore whether the dryness of local soil in the lead-up to the heatwave season could act as a better predictor of heatwaves. This picture was certainly a lot clearer for heatwave intensity and the start of the heatwave season, with more intense and earlier events associated with dryer conditions for large parts of the country. There are even strong relationships between heatwave frequency and soil moisture, including in regions where there are no ties to ENSO.

What to expect this summer

Based on our results, and the increasing strength of the current El Niño, the odds are that this summer will bring more heatwaves than usual in northern and eastern Australia. There is also a chance that the heatwave season will start earlier and that heatwaves will be more intense over central and eastern areas.

For people living in these areas, be prepared. Especially if rainfall declines over the next couple of months and the local soil has a chance to dry out, this could be a severe heatwave season for a large swathe of the country.

But it is worth remembering that El Niño has a negligible influence on heatwaves in the far southeast. Positive SAM phases have more influence over heatwaves, which of course can be exacerbated by long periods of increasingly dry soil.

For heatwaves, the influence of ENSO isn’t as cut-and-dried as it is for average temperature and rainfall. Instead, it is complicated by the fact that there are several different ways to evaluate heatwaves, and that soil moisture levels also have an important part to play.

But as the climate continues to warm thanks to human-induced climate change, more severe heatwave seasons are a certainty, even more so should severe El Niño events increase in line with recent projections.

Dr Sarah Perkins is a Research Fellow in the Climate Change Research Centre at UNSW.

Extreme heat and rain: thousands of weather stations show there's now more of both, for longer