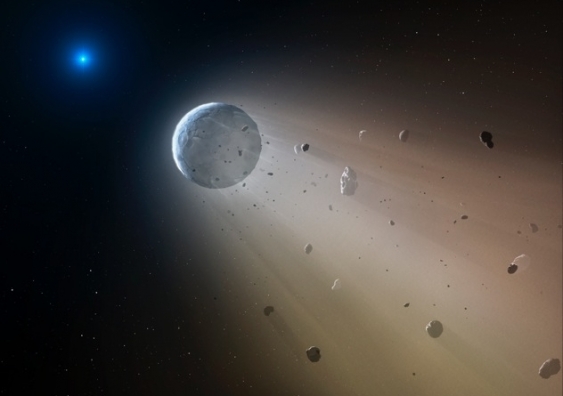 An artist's impression of a rocky planet disintegrating around a white dwarf star. Credit: Mark A. Garlick

An international team of astronomers has used a new UNSW Australia telescope to help discover a large rocky object disintegrating in a death spiral around a distant white dwarf star.

The asteroid is the first planetary object to be seen transiting a white dwarf – a hot, Earth-sized core left over after a star reaches the end of its life, swells into a red giant, and then discards its outer layers.

The discovery, by a team led by Andrew Vanderburg of the Harvard-Smithsonian Centre for Astrophysics and including UNSW astrophysicist Dr Robert Wittenmyer, is published in the journal Nature.

The $250,000 UNSW telescope is one of four small, robotic telescopes based in Arizona in the US that are designed to hunt for planets outside our solar system. Together, they make up the Miniature Exoplanet Radial Velocity Array, MINERVA.

“The benefit of owning your own telescope is that you can point it wherever you want to, whenever you want to, as soon as something interesting is spotted, ” says Dr Wittenmyer, lead investigator on the UNSW telescope, which was funded with grants from the Australian Research Council.

“MINERVA only became operational in May, and already it has found something very cool,” he said.

An international team of astronomers has used a new UNSW Australia telescope to help discover a large rocky object disintegrating in a death spiral around a distant white dwarf star.

The team of astronomers first observed a regular dip in the brightness of the white dwarf every 4.5 hours using NASA’s space-based Kepler K2 telescope. This suggested an object was orbiting the white dwarf at a distance of about 840,000 kilometres – about twice the distance from the Earth to the Moon.

They then made additional observations using MINERVA and several other ground-based telescopes, which revealed signs of more chunks of orbiting material and an extended cloud of dust.

“This is something no human has seen before. We’re watching a solar system get destroyed,” says Mr Vanderburg.

The white dwarf star is located about 570 light years from Earth in the constellation Virgo. The find also confirms a theory that disintegrating asteroids can pollute white dwarfs with heavy metals, such as silicon and iron.

Harvard University, Penn State, the University of Montana, and UNSW each contributed one of the four telescopes that make up MINERVA, which is housed at Fred Lawrence Whipple Observatory in Mount Hopkins, Arizona.

Early next year MINERVA will begin a systematic search for Earth-like exoplanets orbiting stars within about 75 light years from Earth, making observations every night.

“We suspect there are small exoplanets everywhere. They are just hard to find. So the best solution was to buy a telescope and start looking,” says Dr Wittenmyer.

Dr Wittenmyer is a member of the UNSW Exoplanet Team led by Professor Chris Tinney, which is the largest exoplanet research group in Australia.