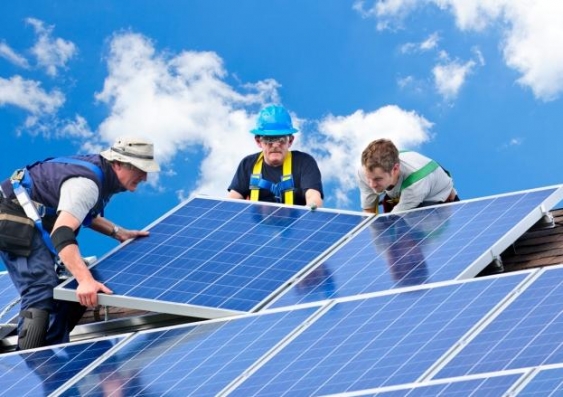 OPINION: Over the past five years the world has seen a dramatic fall in the cost of solar energy, particularly rooftop solar panels or solar photovoltaic power. It is now a real alternative and considerable player in the power markets.

As solar panels do not always produce all the electricity they possibly can, rooftop solar today contributes around 2% of Australia’s total electricity generation. But in some states during the day, solar’s contribution already reaches double digits. You can watch solar generation live here.

But what’s next for rooftop solar? It’s likely that costs will continue to fall, eventually making solar the dominant source of electricity in many parts of the world including Australia. Here’s the evidence.

The following 2014 graph from investment bank Bernstein Research shows just how fast the cost of solar has fallen compared to other energy sources. We can also look at the representative German spot-market price of solar panels, as in the following graph sourced from the Fraunhofer Institute for Solar Energy Systems ISE. The more solar panels are made, the cheaper they become. Fraunhofer ISE, Germany, Author provided

This shows that as the cumulative production of solar panels doubles, the price is reduced by about 20% – prices are now 40 times lower than they were 30 years ago.

This is known as the “learning curve”, and can be used to predict the future cost of solar panels, although it can’t predict the exact year when a certain price will happen as the production volume is correlated to market and policy forces.

Already today solar panels only cost around A60c per kilowatt peak capacity in Australia, and the cost of the panels no longer dominates the cost of installing a solar system on a roof or the ground. Other installation costs – such as mounting and labour – are more difficult to reduce, such that further installation reductions may be more challenging and slower.

To enable further cuts to the price of solar energy, we need to foremost look at improving the efficiency of solar panels, which will most directly lower the total cost for solar power.

Solar panels don’t convert all the sun’s energy into electricity. What proportion they convert is known as efficiency.

Efficiency is the most important factor in reducing the costs of solar – because the greater the efficiency of your panels, the fewer materials you need per amount of generated energy (that is, per kilowatt hour). Efficiency is increasing across all solar panel technologies. Author provided

This graph above (from the US National Renewable Energy Laboratory) shows that all solar panel technologies have been getting more efficient. Currently commercial solar panel efficiencies are from 16% to 21%, but recently a new record of 46% was set in Germany. University of New South Wales has achieved efficiencies of 40%. So there is a lot of room for improvements generally, but also for current commercial solar flat panels.

Solar panel technology may be the technology with the greatest potential to improve efficiency compared with other renewable technologies.

What does the future hold?

We can sum all of this up by looking at how much energy goes into producing solar panels versus how much they produce.

A recent study has shown that in five years a solar panel will produce enough energy in six months to pay back all the energy used in manufacturing it. That means after six months the panels will be a net source of energy.

This is known as energy return on energy invested – and we can compare it across a variety of energy sources. The energy return of oil and gas is declining, and solar is catching up. By 2030 solar will likely surpass oil and gas.

So from whatever angle you look at it, it seems clear that current and future developments will leave solar power from rooftops and grount-mounted plants as likely the most cost competitive primary source of energy in Australia. This competitiveness shall allow economically for a variety of solutions (e.g. storage, demand management, solar fuels) to address the variability of supply and thus extend the use of solar power from offsetting daytime peaks today to supplying 40, 50 or even 60% of the total energy needs.

Bernhard Mitchell is a Research fellow in Photovoltaics at UNSW