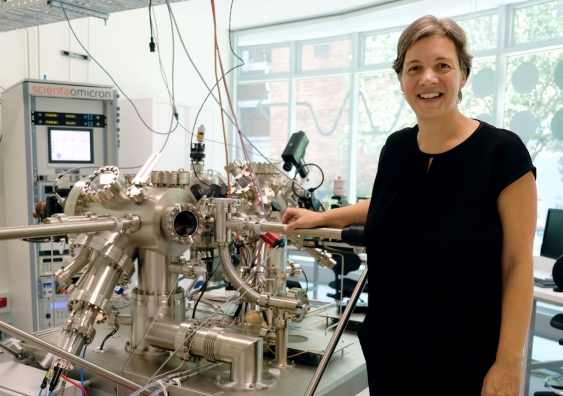 Few countries have taken scientists to their heart like Australia has embraced Michelle Simmons. The British-born physicist is coming to the end of her term as Australian of the Year, a title that celebrates her as “an evangelist for Australian scientific research and a role model to young scientists everywhere”.

But while Professor Simmons, Scientia professor of physics at the University of New South Wales, is grateful for the opportunities that she has had to drive forward discoveries in quantum computing since she arrived from the UK in 1999, she has given her adopted country some tough love, saying that a Napoleon complex and glass half-empty mentality are thwarting its transformation into a high-tech heavyweight.

Professor Simmons said that insecurities about scale and a fixation with funding were blinding Australia to its “massive research base strength” and the grant schemes that helped spawn it.

And while the country was uniquely placed to bridge gaps between business, government and academia, according to Professor Simmons, its promise was undermined by an “ingrained sense of ‘it can’t be done here’”.

Professor Simmons, who heads a team developing a silicon-based quantum computer, said that she was lured to Australia by “that spirit of don’t take yourself too seriously, but be willing to try something new”. In the event, she won more funding than she would have received “if I’d stayed in Europe. Compared with other countries across the world, it’s pretty good here.”

Professor Simmons said that the US had no schemes like Australia’s centres of excellence, such as the quantum computation and communication technology network that she runs across six universities, or its system of research fellowships, although it is expected to try to replicate them within the next few years.

“For young people setting up research, they’re just phenomenal,” Professor Simmons said. “In the US you’re constrained to very small teams. In Europe it’s very bureaucratic. Australia has the ability to break down the boundaries between industry, academia and government. Because it’s a smaller country, there are unique opportunities for Australia to lead those novel ways of doing things.”

Her observations contrast with the ambiguous self-view of Australia’s research sector, which prides itself for punching above its weight while berating itself for an arm’s-length relationship with business.

But that is symptomatic of the “holding back” that Professor Simmons said that she only became aware of after arriving in Australia. “I wasn’t born here. I don’t have that ingrained sense that it’s got to be done overseas. I came here because I think this is the best place to do research,” she explained.

“We’ve got highly skilled people and a good education system and are trying unique things right at the forefront. But one of the things I’ve realised over the past few years is that when we set up companies here, there’s a complete change – a kind of nervousness about whether we can do it.

“People say you can’t build companies in Australia. You can only build them to a certain point and then somebody’s going to buy them out. Traditional markets are further away and our salaries are higher, so there are all those challenges.

“They don’t have the concept that you can bring the economic value back here in the long term. We’re geographically close to Asia. We’re in a great position. If we change that mindset, we’re the best place to do it.”

Professor Simmons chided the university sector for a disproportionate focus on funding cuts, such as last month’s freezing of a research support scheme that will cost universities an estimated $329 million.

“The reality is, every country benefits from having more research funding,” she said. “You could double research funding here and Australia would perform even better than now, so it’s a no-brainer that you would do that. But whoever’s in power has to balance it with everything else.

“Within what we get, we do incredibly well. There are opportunities to be positive about the future. If you fixate too much on not getting more, it gets a bit stale.”

Professor Simmons relinquishes the title of Australian of the Year on 26 January. She said that her tenure had been a fantastic opportunity to advocate for science and get an insider’s view of the workings of government and business. But it had been a “full-on” experience at a critical juncture for her research centre.

The biggest surprise was the “double take, with a slight tinge of envy” from overseas scientists. “Their image is that Australia celebrates Crocodile Dundee or a cricket captain,” she said. “To see Australia popularising a fairly hard esoteric science subject – it shifts the narrative about Australia being not just a fun place that’s good at sport, but [also one that] actually values research and high-tech innovation.”

Michelle Simmons will be speaking at the Times Higher Education Research Excellence Summit: Asia-Pacific at the UNSW Sydney from 19-21 February.

Keep pressing the case for research as a public good