UNSW Sydney has announced the part-time appointment of Nobel Laureate Sir Fraser Stoddart to the School of Chemistry. 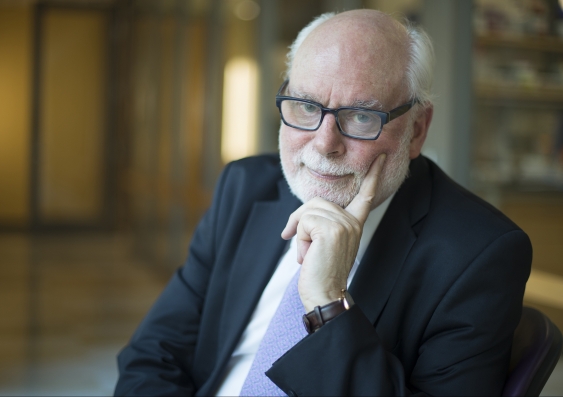 UNSW Sydney has announced the part-time appointment of Nobel Laureate Sir Fraser Stoddart to the School of Chemistry within the Faculty of Science.

Sir Fraser Stoddart is one of the leading chemists of our time, jointly awarded the Nobel Prize in Chemistry in 2016 along with Jean-Pierre Sauvage and Bernard Feringa “for the design and synthesis of molecular machines”.

Molecular machines are either natural or synthetic molecules that convert light, electrical or chemical energy into mechanical motion. These tiny creations are approximately 300,000 times thinner than the diameter of a strand of hair.

Sir Fraser believes that, while these smallest-of-all machines have a role to play in revolutionising chemical synthesis and catalysis, they will also impact various aspects of materials science: they have already led to the production of scratch-resistant polymers for coating onto the surfaces of cell phones, as well as being introduced into lithium-ion batteries producing beneficial effects upon their life-time usage.

Sir Fraser is presently a Board of Trustees Professor of Chemistry and head of the Stoddart Mechanostereochemistry Group in the Department of Chemistry at Northwestern University in Illinois, and has a research laboratory supporting young researchers at Tianjin University in China. He plans to spend his appointed three months each year in Sydney, beginning in the period January through March 2019, where he will establish a team to realise the vision of his New Chemistry initiative.

He was born in Edinburgh and went to university there: he then took up a postdoctoral position in Canada at Queen’s University in Kingston, Ontario, before returning to the UK as an academic, initially at Sheffield University and then at the University of Birmingham. He spent three transformative years at the ICI Corporate Laboratory in Runcorn: it was there, between 1978 and 1981, that he established the principles of molecular recognition around the wipe-out weed killer Paraquat that were to be used subsequently in the construction of molecular machines.

It was at Birmingham, as a professor of organic chemistry from 1990 until 1997, that Sir Fraser published key work cited in the award of his Nobel Prize, such as in 1991 the first molecular shuttle – a molecule based on a dumbbell-shaped component with two docking points on which a mechanically trapped ring component jumps back and forth. After only three years he had worked out how to convert molecular shuttles into switches. The challenge subsequently has been one of transforming molecular switches that do not work into machines that do work when supplied with a fuel in the form of light, electricity or chemicals.

Before joining Northwestern University in 2008, Sir Fraser spent 10 years at the University of California in Los Angeles where he introduced his molecular switches into molecular electronic devices and drug delivery systems.

Dean of UNSW Science Professor Emma Johnston said she was thrilled to be welcoming Sir Fraser to the Faculty: “In addition to his Nobel-prize-winning research, Sir Fraser has also made exceptional contributions to the fields of carbohydrate and second-sphere coordination chemistry.”

Both have led to start-up companies, one which has just launched a product line of anti-ageing creams on to the market and the other which is exploring environmentally-friendly gold extraction methods. Sir Fraser is also conducting research into creating functional systems using energy inputs and the development of batteries and supercapacitors for energy storage.

Alongside his stellar research, Sir Fraser will teach into undergraduate courses in chemistry at both first and higher year levels, and help to inspire our next generation of scientists.

In 2007, Sir Fraser received a Knighthood from Queen Elizabeth II for his services to chemistry and molecular nanotechnology.

“I am excited at the prospect of being able to spend a considerable amount of time each year in Australia at a world-class university such as UNSW Sydney,” Sir Fraser said.

“UNSW’s vision to make a global impact and its focus on education and research excellence was particularly appealing.

“The future for science is a very bright one when it comes to the design and synthesis of molecules that aid and abet the development of systems chemistry in its broadest sense.

“The New Chemistry initiative will open doors in materials science across different length scales. In terms of function, what was science-fiction a few years ago will become reality during the next decade or two.”

UNSW President and Vice-Chancellor Professor Ian Jacobs said the University was extremely honoured to have Sir Fraser join the Faculty of Science.

“I am delighted by Professor Stoddart’s appointment. Less than 1000 people have been awarded a Nobel Prize since the awards first began in 1901, and there have only been 15 awarded to Australians. To have such an outstanding Nobel Laureate choose to work at UNSW is incredibly exciting and a reflection of the quality of this University,” Professor Jacobs said.

“Alongside his stellar research, Sir Fraser will teach into undergraduate courses in chemistry at both first and higher year levels, and help to inspire our next generation of scientists.”

Head of the School of Chemistry Professor Scott Kable said: “Professor Stoddart is an incredible researcher and teacher. He has trained over 450 postgraduate students and postdoctoral fellows and his 1000-plus invited seminars and lectures are legendary and inspiring for undergraduate and post-graduate students alike.

“He also told me that he wants to mentor and inspire early career researchers. I look forward to having him in the School and interacting with our many young researchers, both staff and PhD students.”

The New Chemistry initiative at UNSW will become a central part of a UNSW Institute under the UNSW Future Scheme focusing on Systems Chemistry and Synthetic Biology. Sir Fraser will also aim to secure significant industry funding to develop his cyanide-free gold processing technology at UNSW in partnership with Australian mining companies.

Scientists use novel ink to 3D-print ‘bone’ with living cells