The technical breakthrough, announced at an event at UNSW Sydney today, was published in the journal Nature. 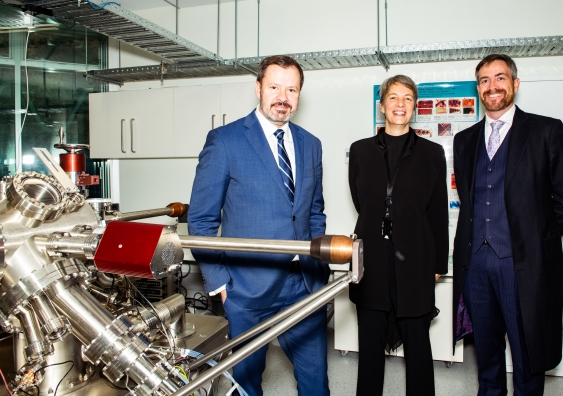 Industry and Science Minister Ed Husic joined UNSW Professor Michelle Simmons and UNSW Vice-Chancellor and President Attila Brungs on a tour of the Silicon Quantum Computer labs. Prof Simmons and the SQC team announced a major breakthrough on its journey to build a commercial silicon computer.

Industry and Science Minister Ed Husic has touted the world-leading work of UNSW Sydney quantum scientists during a visit to the Kensington campus on Thursday.

Mr Husic, who was on campus for the announcement of a significant technical breakthrough by UNSW Professor Michelle Simmons and the team at Silicon Quantum Computing (SQC), said the latest development is evidence of Australia’s superiority in the space.

“I want to tell you how much what you do means to the country,” said Mr Husic, referring to the SQC team gathered at the event. “You are contributing over a long period of time to something that is a big deal not just for the country, but for the world.”

Mr Husic acknowledged the work of Prof. Simmons and the SQC researchers who announced the development of the world’s first integrated circuit manufactured at the atomic scale.

“Our quantum capabilities are clearly world-leading and building on the proud history of research excellence,” Mr Husic said. “It is a clear sign that our companies, our entrepreneurs and our researchers are some of the world’s best.”

The government has announced an investment of $1 billion in the form of a Critical Technology Fund as part of the broader National Reconstruction Fund. This will help to support home-grown innovation and production in areas like engineering, data science, software development, AI, robotics, and quantum.

To ensure the continuous growth and supercharge the quantum computing industry, the government is providing $4 million for up to 20 PhDs in quantum research to support universities as they establish national research and education partnerships.

Read more: Scientists emulate nature in quantum leap towards computers of the future

Mr Husic pointed to a range of statistics that show Australia punches well above its weight when it comes quantum research. Australia accounts for a third of 1 per cent of the world’s population, but it accounts for 4.2 per cent of global quantum research. Quantum technology research by Australian researchers is cited 60 per cent more than the global average. Eleven Australian universities rank above the global standard for quantum technology research.

A career high for Michelle Simmons

Prof. Simmons, founder and director of SQC, described the technical breakthrough as the biggest result of her career.

“This has never been done before and nobody else in the world can do it,” Prof Simmons said. “It is a hugely exciting result and what is even more exciting for us is having done that, we have seen that classical roadmap and that we know the commercial devices that are within the next five or six years.”

Prof Simmons and researchers from SQC used the integrated processor – known as an analogue quantum processor – to accurately model the quantum states of a small, organic polyacetylene molecule, proving a pathway to creating new materials that have never existed.

The advancement is a major step for SQC and its customers to construct quantum models for a range of new materials, from superconductors, materials for batteries, pharmaceuticals, or catalysts.

“Today’s news puts SQC and UNSW researchers even closer to their goal and reinforces this University’s position at the forefront of quantum technology,” Prof Brungs said.

“It is the culmination of many years of hard work and is an exemplar of the power of collaboration.”