Australia will reach a target of 50% renewable energy "because research and demand is on our side”, Opposition Leader Bill Shorten said today, during a tour of UNSW’s world leading solar research facilities. 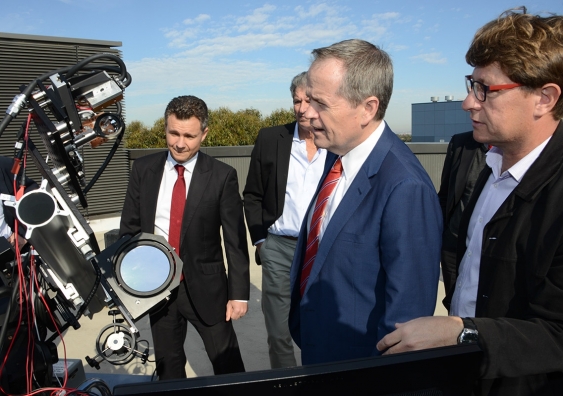 Australia will reach a target of 50% renewable energy "because research and demand is on our side”, Opposition Leader Bill Shorten said today, during a tour of UNSW’s world leading solar research facilities.

Reiterating Labor’s pledge for half the country’s energy mix to come from renewables within 15 years, Mr Shorten said: “We have the best solar researchers in the world ... We have so much sunlight, so much wind power in this country, we would be literally crazy not to pursue more ambitious goals for renewable energy ”.

UNSW is home to the Australian Centre for Advanced Photovoltaics with an internationally renowned roll-call of researchers, including the “Father of solar cell” Scientia Professor Martin Green. Professor Green and his colleague Dr Mark Keevers recently achieved the highest efficiency ever reported for converting sunlight into electricity.

The 40% breakthrough – which has earned the pair a Eureka Prize finalist berth –  is based on the use of focused sunlight, and is particularly relevant to photovoltaic power towers being developed in Australia.

The milestone is the latest in a long line of achievements by UNSW solar researchers spanning four decades. These include the first photovoltaic system to convert sunlight to electricity with over 20% efficiency in 1989.

Accompanied by UNSW President and Vice-Chancellor Ian Jacobs, Dean of Engineering Mark Hoffman and the University’s world record-holding solar researchers, Mr Shorten met students from the Faculty of Engineering's solar racing team Sunswift, which holds its own world record for the fastest solar powered electric vehicle over a distance of 500 kilometres. 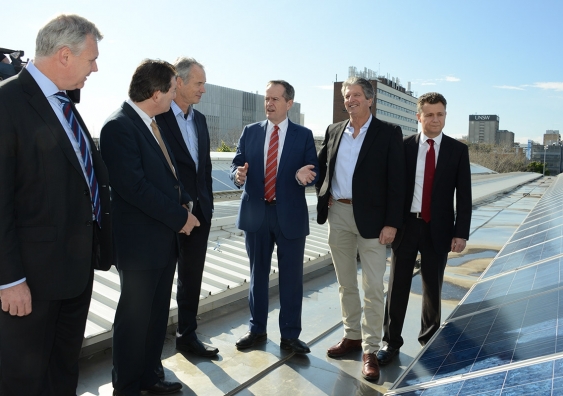 The federal Labor leader then toured UNSW’s Tyree Energy Technologies Building and inspected its rooftop photovoltaic system and the focused-sunlight technology behind the recent 40% efficiency record.

Also accompanying Mr Shorten was Labor MP for Kingsford Smith, Matt Thistlethwaite, who said he was proud of the work being done in his electorate by UNSW’s photovoltaic researchers and students: “For decades the work of this facility has been cutting edge, leading the world in the development of solar technology, ensuring it is much more efficient and, importantly, ensuring that the cost of the technology comes down over time.”

Professor Ian Jacobs told the politicians the breakthroughs developed at UNSW had the potential to transform the energy landscape.