Whale songs’ changing pitch may be response to climate changes

Blue whales - among the loudest animals in the oceans - are singing a little flat, and there may now be more clues as to why. 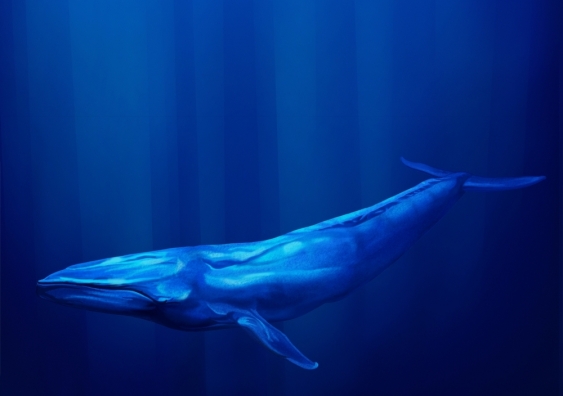 Blue whales around the world have been dropping pitch incrementally over several decades, but the cause has remained a mystery. A new international study may have uncovered some clues.

The study was led by Dr Emmanuelle Leroy, who conducted the research with colleagues at University of Brest & French National Centre for Scientific Research (CNRS), Geosciences Ocean Lab, Plouzané, France. Dr Leroy is now based at UNSW Sydney.

The team found a correlation between the seasonal variation in the whale’s pitch with breaking sea ice in the southern Indian Ocean.

The new research rules out noise pollution as the cause of the pitch change.

The findings were published in the American Geophysical Union’s Journal of Geophysical Research: Oceans.

Loudest in the ocean

Blue and fin whales are among the loudest animals in the oceans as well as the largest.

Only males sing, humming about as loud as large ships.

The whales’ loud songs can travel more than 1,000 kilometres underwater, allowing the whales to communicate across vast oceans.

Pitch, or the perception of how high or low a note sounds, is a result of the frequency of the sound wave, usually measured in hertz.

The authors suggest the pitch drop is an anatomical consequence of singing less loudly.

The whales’ calls could be quieter due to growing numbers of whales or changes in the ocean due to climate change.

"We think it is something non-voluntary from the whale. Decrease the call intensity and it will decrease the call frequency, just because of the sound emission mechanism," Dr Leroy says.

The new research also uncovers a seasonal counterpoint in the calls of Antarctic blue whales, potentially related to the noise of melting sea ice.

During summer, blue whale calls in the southern Indian Ocean increase in pitch, potentially to be heard over breaking sea ice.

"The noise is related to the increasing number of free icebergs in summer. When the ice sometimes cracks, like when you put ice in your drink, it makes noise.

"This noise is really strong and will propagate over really long distances, so we can hear this noise at our northernmost site, up to 26 degrees south."

Six stationary underwater microphones recorded the calls over six years, from 2010 to 2015, in the southern Indian Ocean, an area spanning 9 million square kilometres.

The stereotypical song of the Antarctic blue whale spans about 15 to 30 hertz, at the very bottom edge of human hearing, which ranges from about 20-20,000 hertz.

Compared to 2015 values, this is about a whole tone or major second interval difference in Western music tradition.

The research also found whale calls rise in pitch by 0.2-0.3 hertz from October through February.

According to the authors, low pitches carry farther underwater but the pitch change is likely too small to impact how whale calls travel over long distances in the ocean and too subtle for the whales to detect any changes.

As the long-term trends in pitch drop are steady around the global range of the whales, this indicates the ongoing drop cannot be in response to human-generated noise.

The authors suggest the drop could be a by-product of lower volume if the rebounding whale population doesn’t need to sing as loudly to reach other whales.

Recent population assessments estimate there are 10,000 to 25,000 blue whales globally, up from a few thousand at the end of commercial whaling in the 1970s, but still fewer than 10 percent of their numbers before the 20th century.

"Because the whaling stopped, the whale population is increasing," Dr Leroy says.

"They can decrease their call intensity to keep in touch, because there are more whales. These calls are long-distance communication."

Alternatively, Dr Leroy says, the whales may not need to be so loud because sound travels further in ocean water made increasingly acidic by climate change.

The speed and distance that sound travels are affected by the temperature, pressure and chemistry of the ocean.

However, naturally-occurring seasonal ocean noise could explain the seasonal variation in whale call pitch observed by the researchers in the southern Indian Ocean.

They observe the seasonal variation in pitch during the months of the austral summer when sea ice breaks up. Iceberg crackles are loud. They boom for thousands of kilometers in a frequency range overlapping the pitch of the Antarctic blue whales’ calls.

To be heard over the noise, the whales may need to get a little louder, the study suggests. Singing louder makes the pitch go up.

"What’s surprising is the long-term and short-term changes could have the same reason, a change in call intensity, but the change responds to two different causes," Dr Leroy says.