Opinion When did Aboriginal people first arrive in Australia?

Aboriginal Australians have effectively been on their country as long as modern human populations have been outside of Africa. 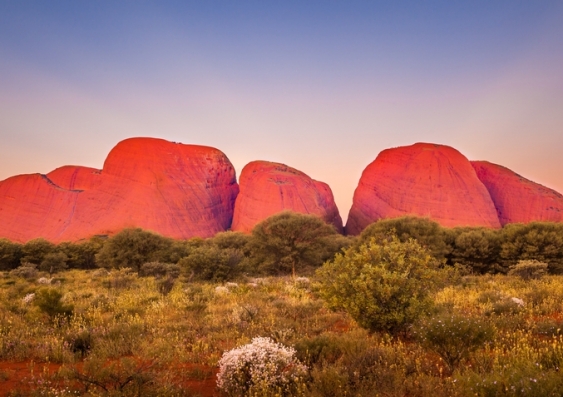 Many Aboriginal Australians would say with conviction that they have always been here. Their ancestors and traditional learnings tell them of this history, and their precise place within it.

Our review of the scientific evidence, published today in Proceedings of the National Academy of Sciences, suggests that for all practical purposes, this is indeed the case.

Their ancestors arrived shortly after 50,000 years ago – effectively forever, given that modern human populations only moved out of Africa 50,000-55,000 years ago.

Earlier genetic analysis of historic Aboriginal hair samples confirmed the incredibly long and deep relationships between individual Aboriginal groups and their particular country. The small locks of hair were collected during anthropological expeditions across Australia from the 1920s to the 1960s.

Analysis of maternal genetic lineages revealed that Aboriginal populations moved into Australia around 50,000 years ago. They rapidly swept around the west and east coasts in parallel movements - meeting around the Nullarbor just west of modern-day Adelaide. 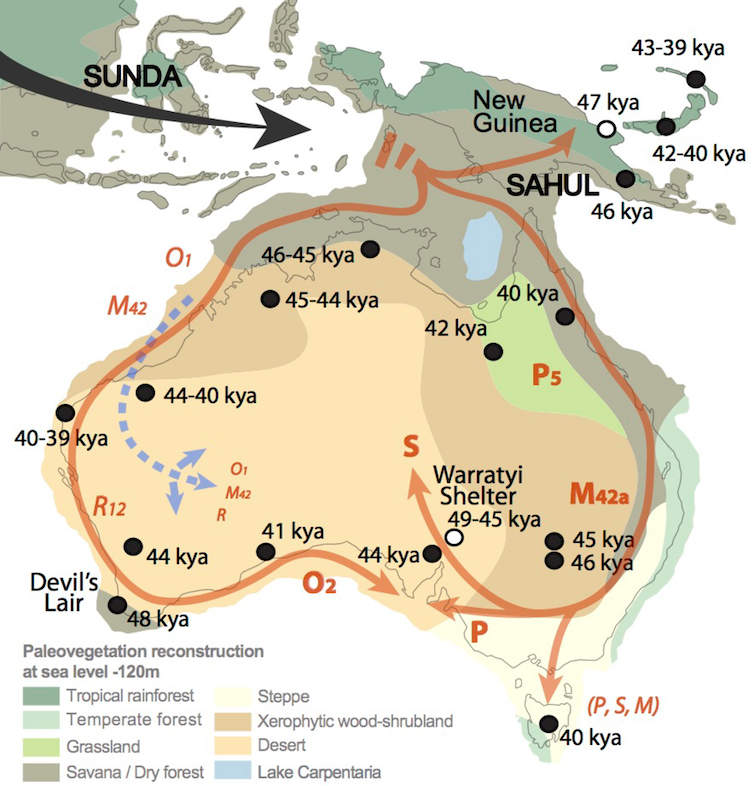 Map of the original colonisation of Australia showing different genetic markers carried by Aboriginal populations (in red), and the vegetation zones at the time. Archaeological dates are shown in black, with 1 kya = 1,000 years ago. Nature, Tobler et al.

Archaeological sites and dates (shown above) closely match the genetic estimates. This indicates a very rapid movement throughout Australia 48,000-50,000 years ago.

It was only a few thousand years earlier that a small population of modern humans moved out of Africa. As they did, they met and briefly hybridised with Neandertals before rapidly spreading around the world.

They became the genetic ancestors of all surviving modern human populations outside of Africa, who are all characterised by a distinctive small subset of Neandertal DNA – around 2.5% – preserved in their genomes.

This distinctive marker is found in Aboriginal populations, indicating they are part of this original diaspora, but one that must have moved to Australia almost immediately after leaving Africa.

The movement from Africa to Australia culminated in a series of hazardous sea voyages across island southeast Asia.

Recent studies suggest the last voyage, potentially between Timor/Roti and the northern Kimberley coast, would have involved advanced planning skills, four to seven days paddling on a raft, and a total group of more than 100 to 400 people.

The possibility that earlier waves of modern human populations might have moved out of Africa before 50,000 years has also been raised.

But in our review of these events, we point out that there is no convincing fossil evidence to support this idea beyond the Middle East.

One of the most important claimed potential early sites is in northern Australia, at Madjedbebe, a rock shelter in Arnhem Land. Human presence here was recently declared at more than 65,000 years ago.

This 65,000-year date has rapidly become accepted as the age for colonisation of Australia. It has appeared widely in the media and elsewhere, in political statements and comments by the Prime Minister.

But there is good reason to question a 65,000-year date, and the extent to which this contrasts with the sudden wave of archaeological sites that sweep across Australia shortly after 50,000 years ago.

These sites include Barrow Island and Carpenters Gap in the Kimberley, Devils Lair south of Perth, Willandra Lakes in NSW, and Warratyi rockshelter in the Flinders Ranges.

This rapid archaeological manifestation at 50,000 years is a perfect match for the genetic evidence from Aboriginal maternal, paternal, and genomic lineages, and a far better fit with the extinction of Australia’s megafauna around 42,000 years ago.

An age limit for human migration

One of the most interesting ways we can date the dispersal of modern humans around the globe, including Australia, is through that original interbreeding event with Neandertals as we left Africa.

About a decade ago, an ancient human leg bone was found on the banks of a Siberian river by an ivory hunter. Radiocarbon-dated at 43,000-45,000 years ago, the entire genome of this individual, named Ust’-Ishim after the site, was sequenced using the latest ancient DNA technology.

The genomic sequence revealed the bone contained the standard 2.5% Neandertal DNA signal carried by all non-Africans. But it was still present in large continuous blocks and had yet not been dispersed into fragments around the genome as we see in more recent ancestors and ourselves.

Given the evidence is so strong that the ancestors of modern human populations only started moving around the world 50,000-55,000 years ago, could the human activity at Madjedbebe really be more than 65,000 years old?

One of the major limitations of the Madjedbebe study is that the stone artefacts themselves weren’t dated, just the surrounding sand layers.

As a result, over time, even the slightest downward movement of the artefacts within the unconsolidated sand layers at Madjedbebe would make them appear too old.

We identify a range of factors which are common around the site, such as termite burrowing and heavy rainfall, that could cause stone artefacts to sink.

Many archaeological signs suggest activity at Madjedbebe is actually much younger than 65,000 years, and overall, the extent to which the site is an outlier to the rest of the Australian record should raise a red flag.

Either way, Aboriginal Australians have effectively been on their country as long as modern human populations have been outside of Africa.

How does this help us better understand Aboriginal history? By appreciating the enormous depth of time that Aboriginal groups have been on their own particular country, and the extent to which all their history, knowledge, and ancestors form part of that country.

It is this gulf between a European history of constant migration and global dispersal, and the profoundly deep Aboriginal connection to one particular part of the world, that leads to failures to comprehend why being on country is not simply “a lifestyle choice”, but a fundamental part of their identity.

Dr Graham Brown, a research associate from the Museum and Art Gallery of the Northern Territory, was a contributor on this article.

An unlimited passion for equality for sport coaches