Scientists have discovered why heavyweight galaxies living in a dense crowd of galaxies tend to spin more slowly than their lighter neighbours. 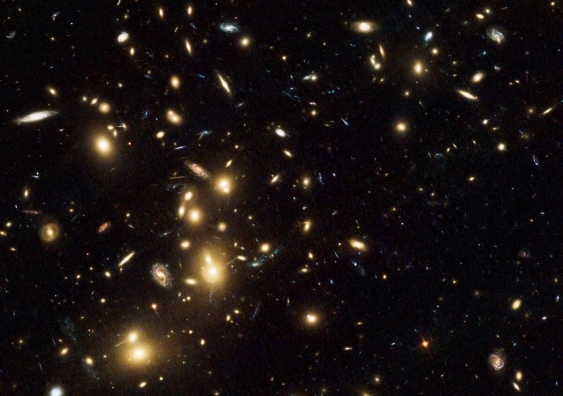 Scientists have discovered why heavyweight galaxies living in a dense crowd of galaxies tend to spin more slowly than their lighter neighbours.

“Contrary to earlier thinking, the spin rate of the galaxy is determined by its mass, rather than how crowded its neighbourhood is,” says study first author Associate Professor Sarah Brough of UNSW Sydney and the ARC Centre of Excellence for All-sky Astrophysics, CAASTRO.

The finding, based on a detailed study of more than 300 galaxies, is published in The Astrophysical Journal.

To measure how fast their galaxies rotated, the researchers used an instrument called the Sydney-AAO Multi-object Integral field spectrograph (SAMI) on the 4-metre Anglo-Australian Telescope in eastern Australia.

SAMI ‘dissects’ galaxies, obtaining optical spectra from 61 points across the face of each galaxy, 13 galaxies at a time.

“We want to know which factors really drive how galaxies evolve,” says team member Dr Matt Owers of the Australian Astronomical Observatory and Macquarie University. “In this case, we’ve sorted out nature versus nurture.”

The new finding runs counter to previous studies, made with smaller samples of galaxies, which concluded that a galaxy’s spin rate is determined by the other galaxies in its neighbourhood.

Associate Professor Brough says this earlier conclusion was spurious. “Once you take into account the strong association with mass, there’s no link between a galaxy’s spin rate and its environment,” she says.

CAASTRO is funded under the Australian Research Council (ARC) Centre of Excellence program, with additional funding from the seven participating universities and from the NSW State Government's Science Leveraging Fund.