A world-first digital application allowing archaeologists to share information directly from the field is set to revolutionise archaeology. 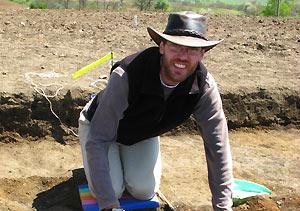 Shawn Ross at an excavation site in Kazanlak, Bulgaria.

The recording of archaelogical data is set to be revolutionised by a suite of world-first digital applications allowing archaeologists to share information directly from the field.

UNSW is leading the development of open-source mobile device applications that will allow archaeological data to be recorded and archived to international cultural heritage databases.

The Federated Archaeological Information Management Systems (FAIMS) project has received a federal government grant of $950,000 to develop custom-built applications to be used on android phones and tablets to capture data, as well as tools to edit and analyse it.

Project leader Dr Shawn Ross, from the Faculty of Arts and Social Sciences, said the digitisation and online dissemination of data will change the future of archaeology.

“It’s time to take archaeological records out of drawers and filing cabinets,” said Dr Ross. “This new system will allow information to be stored and shared in an accessible and re-useable format so that research results can be critiqued and comparative research more easily undertaken.”

Dr Ross has been involved in archaeological fieldwork in the Mediterranean and Black Sea regions for the past 15 years, most recently working on an ARC-funded archaeological and palaeoenvironmental study in Central and South East Bulgaria.

“I will be able to produce and share high-quality digital datasets from my fieldwork in Bulgaria that will help other researchers in the region identify their finds, as well as providing comparative datasets for researchers studying similar cultures elsewhere in the world.”

He says the ability to produce digital archaeology records will ensure more accuracy.

“Currently, digital data is produced through double-entry. It’s hand-written on site and then manually typed into a database, which leaves room for error,” said Dr Ross.

“The more people who use this ‘digital infrastructure’ the more powerful it will become. It has the potential to become the chosen research tool of archaeologists worldwide.”

The FAIMS project has been funded by the National eResearch Collaboration Tools and Resources (NeCTAR) program. The project involves participants from 41 organisations, including universities, heritage units and archaeological consultancies. It is due to be completed in 2013.

NeCTAR is an Australian Government project conducted as part of the Super Science initiative and financed by the Education Investment Fund.

Watch Dr Ross and his students working on the Tundzha Region Archaelogical Project in Bulgaria on UNSWTV.