Researchers studying the hydrology of Wellington Caves in central NSW have made a discovery that challenges a key assumption used to reconstruct past climates from cave deposits. 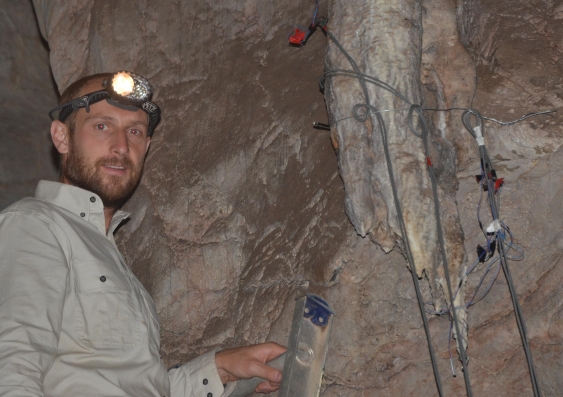 Researchers studying the hydrology of Wellington Caves in central NSW have made a discovery that challenges a key assumption used to reconstruct past climates from cave deposits.

Published in Nature's open access journal Scientific Reports, the research found that there can be a 1.5 degree Celsius difference between the temperature of the air in the cave and the drip water that forms the stalactite.

Stalactites and other cave formations – collectively known as speleothems – form when rainwater drips from the surface into the cave system, picking up minerals along the way that solidify once exposed to the cave air.

Scientists had previously assumed that speleothems formed at a temperature equal to the average temperature outside the cave and used this assumption to construct records of past climate variations, says lead author Dr Mark Cuthbert, holder of a European Community-funded Marie Curie Research Fellowship at UNSW's Connected Waters Initiative.

"However that assumption had never been tested," he says. "The 1.5 degree difference is very significant if you're looking at past climate change. It is similar to the kind of change in temperature that we've had in the last 12,000 years naturally during the Holocene."

The difference in temperature is attributed to evaporative cooling, which occurs as the water moves along the cave wall before reaching the point at which it drips and forms the speleothem.

"If you were looking at a speleothem formed in that environment and didn't know this process of evaporative cooling was happening, you might jump to the wrong conclusions, in either direction, about what the climate outside the cave was like at the time the speleothem formed," says co-author Monika Markowska, a Research Scientist at the Institute for Environmental Research at the Australian Nuclear Science and Technology Organisation (ANSTO).

The same researchers recently found that other important evaporative effects occur between the soil and the cave that also need to be taken into account when interpreting speleothems as records of climate change.

"Further experimental work is underway to investigate the influence of the geometry, orientation, the thermal properties of a particular formation, and the water film thicknesses, on the relative cooling rate," the researchers say in their paper.

Dr Cuthbert hopes that ongoing research will lead to numerical models that take into account all the different variables in a cave system that might influence climate change calculations.

Speleothem chemistry is one of several methods used to reconstruct past climates alongside other techniques including sediments, ice cores, trees and corals. Caves can yield particularly high-resolution records going back several hundred thousand years.