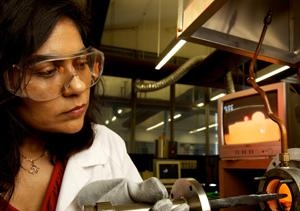 Veena: As a child growing up in India I walked to school past huge waste dumps

Professor Veena Sahajwalla has won the $30,000 top prize in the Innovation Challenge awards run by The Australian.

A passionate recycler, she was honoured for her patented “green steel” process, in which old rubber tyres and plastic are used to replace some of the coke in the electric arc furnaces that generate power for the production of steel.
The revolutionary approach - commercialised locally and overseas by Australia’s largest manufacturer of long steel products, OneSteel - has already prevented more than a million tyres from ending up in landfill and helped reduced greenhouse gas emissions.
Scientia Professor Sahajwalla is Director of UNSW’s Centre for Sustainable Materials Research and Technology. Her interest in mining the mountains of rubbish and waste materials produced by modern society and re-using them in industrial processes or to create new goods was sparked early in life.
“As a child growing up in India I walked to school past huge waste dumps picked over by desperately poor communities,” she says. “I always wanted to turn that waste into something we could absorb back into industrial production.”
The Australian reported that the innovation competition attracted hundreds of entries, including a folding flat-pack house; a DNA test that would help breed horns out of beef cattle; a wave energy converter; a computer program that allows students to conduct laboratory experiments on the internet; and do-it-yourself hearing aids.
Professor Sahajwalla won the $5000 prize in the Manufacturing and Hi-tech Design category of the competition as well as the overall $25,000 prize.
She is Associate Dean (Strategic Industry Relations) of the UNSW Faculty of Science and is one of Australia’s best known engineers and scientists, having been a judge on the ABC TV program The New Inventors.
She has received many awards including the 2011 National Nokia Business Innovation Award at the Telstra Business Women’s Awards and the Banksia Environmental Foundation’s 2012 GE Eco Innovation Award for Individual Excellence.
In May she was appointed as a commissioner on the Australian Government’s Climate Commission.
Watch Professor Sahajwalla's TedxSydney 2011 talk here.
Media contact: UNSW Faculty of Science - Deborah Smith, 9385 7307, 0414 957 597
Twitter Facebook LinkedIn