How does a music festival at an old coalmine in Germany inspire a technique for developing cheap silicon solar cells? For PhD student Jonathon Dore the three-minute answer is lasers. 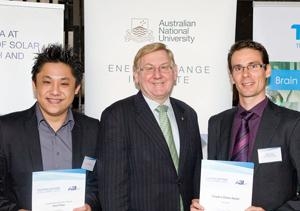 How does a music festival at an abandoned coalmine in Germany inspire a technique for developing high-efficiency and low-cost silicon solar cells in Australia? For PhD student Jonathon Dore the quick, three-minute answer is lasers.

Silicon used in standard wafers is optimised in a melting pot-type process, but Dore needed to devise a way to enhance the quality of his thin silicon layers without damaging the glass sheet underneath.

His solution was a laser beam. By scanning a laser across the surface of the silicon cell he mimicked the heating process. This allowed the silicon atoms to move around and align more efficiently in the cell, while preserving the integrity of the glass.

The technique, pioneered at UNSW, cuts the amount of raw silicon usage by more than 95 per cent and significantly reduces production costs, said Dore, who is working to achieve near equivalent efficiency rates.

ASI-supported PhD scholars and Postdoctoral fellows were invited to attend and present their projects to a panel of eminent solar researchers. Dore, from the School of Photovoltaic and Renewable Energy Engineering at UNSW, won both the People’s Choice and PhD awards.

“Choosing what to include in such a short presentation is a huge challenge and having to present only a snippet of my PhD research seemed impossible,” said Dore.  “But it was a great exercise to think about the very core of what I am doing and why.”

“The fact that the judges appreciated it shows that they also see the bigger picture. That's what I like about this industry.  We solar-geeks are not just in it for the raw science and there is an environmental idealism attached to it, which resonates with the broader community,” he said.

Dore said he hopes to ultimately lower the cost of solar energy compared to non-renewable energy and would like to use as little raw consumable materials as possible and no toxic chemicals at all to mitigate our impact on the natural environment.

“There is a great deal of solar research going on at the moment and collectively, this will ensure that renewable energy is not only the cleanest option, but also the cheapest and that is imperative for a country like Australia,” he said.

A video of Dore’s original 3-minute thesis presentation at UNSW is viewable here.