Shining a light on innovation

There is no better time to be an entrepreneur in Australia. UNSW is doing its part, producing more millionaire graduates and successful technology start-ups than any other Australian university. 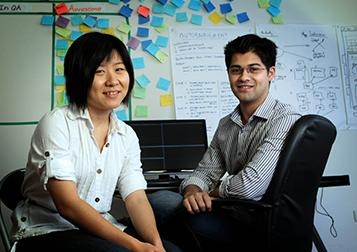 Right now, there are 1,500 technology start-ups in Australia. But by year’s end it’s projected that roughly three-quarters of them will fail. That’s a rate of three startups going under every day.

And yet, “global comparisons with other technology start-up ecosystems suggest there is no better time to be an entrepreneur in Australia”.

Both these assertions come from a 2013 report titled The Startup Economy. It was commissioned by Google to identify ways to accelerate the growth of the Australian technology start-up sector, which “has the potential to contribute $109 billion or 4% of GDP to the Australian economy” and more than half a million jobs by 2033.

Realising the sector’s full potential, however, will mean rapidly expanding the Australian ecosystem over the next 20 years to include 43,000 technology entrepreneurs. Today there are only 2,000.

UNSW is doing its part, producing more millionaire graduates and successful tech start-ups than any other Australian university.

Some of the successful companies led by former UNSW students include software giant Atlassian, BlueChilli, Julpan, ClickView and the education technology companies Smart Sparrow and Open Learning. Some of these founders are already millionaires – others are well on their way.