An advanced technology being pioneered at UNSW to improve the efficiency of first generation silicon solar cells has turned two of the world’s leading solar manufacturers - Hanwha Solar and Suntech Power - into unlikely collaborators. 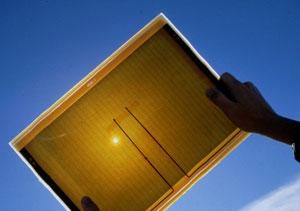 An advanced processing technology being pioneered at UNSW to improve the efficiency of first generation silicon solar cells has turned two of the world’s leading solar manufacturers into unlikely collaborators.

The School of Photovoltaics and Renewable Energy Engineering (SPREE) has signed a new collaborative research agreement with Suntech Power and Hanwha Solar, the first such agreement between the school and two competing companies.

Both manufacturers are interested in an experimental technology whereby tiny metal contact regions can be “self-patterned” into a solar cell’s electric insulator, which rests between the silicon wafer and the aluminium back-plate.

“Currently closely-spaced small-area metal contact regions in an insulating layer can only be formed by deliberately patterning the holes with a laser scanning over the surface, which is quite slow,” says Dr Alison Lennon, a senior lecturer from SPREE.

“Other methods, such as aerosol and ink-jet printing, have been explored, however currently these methods are currently too slow and have not been able to demonstrate the required patterning reliability.”

Taking cues from the metals processing industry, Lennon and her PhD students are investigating a radical approach to automate and quicken this patterning using aluminium anodisation, a well-understood process where a chemical coating is formed on a metal surface to protect against corrosion.

“When you anodise aluminium you can create a porous insulating layer,” says Lennon. “This means we can effectively turn an aluminium layer on a silicon solar cell into a dielectric layer with lots of little holes, which is exactly what we want.”

The UNSW team has made prototypes of cells using this technique. They are now working on understanding how the metal contacts form in order to improve cell efficiencies, and refining the technique so it can produce competitive results on an industrial scale.

“We need to make the process robust, with predictable high efficiencies for manufacturers, and we need to make it cost-effective,” says Lennon.

Lennon, who helped broker the collaborative research agreement, says this is an example of two companies realising they can achieve more as partners than as competitors, and says their support could open the door for faster commercialisation.

“Both Hanwha and Suntech operate high-volume solar manufacturing plants, and both are within the top 10 silicon solar cell manufacturers in the world. So if we can demonstrate the viability of this technology, we are both in a position to move the technology into manufacture relatively quickly,” noted Dr Paul Basore and Dr Renate Egan, the Advanced R&D Directors for Hanwha Solar and Suntech Power, respectively.