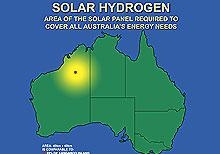 The calculation follows a NASA report that pinpoints Australia as a red-hot prospect for solar energy generation with satellite maps revealing the world's sunniest spots. Australia gleams bright red in a map that paints a vibrant picture of how solar energy reaches different parts of the world.

UNSW is a world-leader in the efficient harnessing of solar energy technologies, such as solar-hydrogen generation and photovoltaic solar panels. "Solar hydrogen is the cleanest, greenest energy option for a sustainable economy," says Dr Leigh Sheppard from UNSW's Centre for Materials Research in Energy Conversion.

The technology of solar hydrogen relies on using a light-sensitive material, titanium dioxide, to harness the power of the Sun to split water into oxygen and hydrogen gas.

Hydrogen is a clean and efficient fuel for powering everything from vehicles to furnaces and air conditioning. "When you burn it, it gives water, so there is no pollution of the environment," Sheppard says. "The process has the additional advantage that it works best in sea water," he says. "Australia is rich in titanium, has abundant sunshine, and we are surrounded by ocean."

It might also be possible to use artesian water, or pump seawater inland, to a large array of solar panels, which could produce hydrogen for local use and export. Hydrogen fuelling stations for cars are operating in several countries including Germany and the US, but a lot more infrastructure would be needed before hydrogen could be widely used as an energy source. It could take five more years to commercialise the water-splitting technology once it was fully developed.

The NASA maps could help guide billions of dollars in solar investments for a world worried by floods, droughts, heatwaves and rising seas, problems widely blamed on burning fossil fuels.

UNSW renewable energy expert Dr Mark Diesendorf says NASA's maps would help companies interested in building solar power stations and reveal the energy possibilities of the Sun. "Australia has got lots of solar energy potential and it's not doing enough to tap into that," he says.