Our social identities lie at the core of many psychological processes, including the emotional reactions of football fans to their teams' victories and losses, writes Lisa Williams. 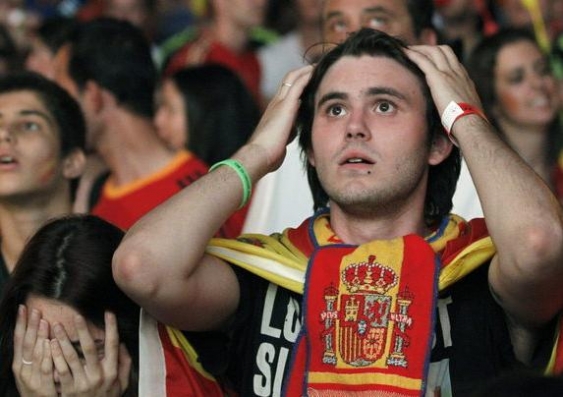 OPINION: Let’s imagine this all-too-familiar scene: a fan, perched on the edge of his or her seat, eyes wide open in anticipation, a quick inhale at a goal attempt – quickly followed by either a joyous and prideful cheer or a groan of disappointment and hands on the head.

There’s no denying that watching the World Cup is an emotional experience, whether you’re an average sports consumer, a fair-weather fan or a diehard fan.

Social psychological research, originally championed by Robert Cialdini and carried on by many other social psychologists, has identified two processes that describe fans' responses to their teams' victories and losses: BIRGing and CORFing.

BIRGing (short for Basking in Reflected Glory) refers to the process in which a fan claims association with team they support following a win. In short, “We won! We’re in it to win it!”

On the other hand, CORFing (short for Cutting off Reflected Failure) refers to the distancing and severing of ties when a fan’s team loses. Now, it’s “They lost. They’re out of the tournament now.”

BIRGing and CORFing predict the explanations (or excuses) we make after matches.

BIRGing leads to an internal attributional style: explaining the win with qualities inherent to the supported team (the awesome lineup, the excellent coaching or the support of the fans).

BIRGing and CORFing can be observed in choice of team apparel after a game – sure enough, fans of winning teams often claim collective success by proudly wearing team colours and logos. Following a loss, though, fans rarely wear the team regalia.

Take a look around the day after a key match – chances are you’ll see evidence of this on your morning commute or at your post-work happy hour.

The reason we engage in BIRGing and CORFing has to do with one key aspect of our identities: they are inherently social in nature.

Our social identities lie at the core of many social psychological processes, including sports fandom.

A fan can only BIRG insofar as she sees the team as part of her identity – the pride of victory exists only if the team’s success is also construed as the self’s success. And CORFing is only relevant to the extent that a fan feels like he himself is threatened by the loss of his favourite team.

Not all fans are the same – the diehard is quite different from the fair-weather fan.

In fact, failure often hits the diehards the hardest. They can’t simply distance themselves from the team; the team is an integral part of their identity.

Caught up in the moment

One need not be a diehard, or even a fair-weather, sports fan to get caught up in the moment. Step into a pub during a pivotal match and you’re sure to be just as entranced as the rest of the crowd.

Emotions are, in many ways, contagious. In social groups, we often find our own affective experience flavoured by those around us.

We can find ourselves swept into the shared joy of a crowd celebrating their team’s win or the shared dejection following a loss. One angry fan can soon morph into many. Thus the emotional rollercoaster of sporting events can pick up unwitting riders.

It could be argued that one of the reasons why we so often get caught up in sporting competitions such as the World Cup is the promise of pride, a positive emotion stemming from success. It is important to recognise the varieties of pride experiences to see just how compelling this promise might be.

At a personal level, we feel proud when we have achieved a success, usually due to some effort we expended. No doubt, Australian captain Mile Jedinak certainly felt proud after scoring a goal on a penalty kick against the Netherlands last week.

Beyond the personal level, the emotion of pride takes on a variety of flavours. Collective pride arises from success achieved by a group to which someone is integrally a part. Surely the Australian team will feel collective pride if they perform well against Spain in their final match in the 2014 World Cup tonight.

When the success is achieved by someone or a group with whom we identify, we might feel vicariously proud. This is precisely the emotional spin-off of BIRGing.

Pride also foments social bonds by drawing us together with our peers. Pride from a momentous achievement is certainly greater when we share that experience with others.

Whether it’s any variety of pride, BIRGing and CORFing, or simply the thrill and excitement of elite athletic competition, the World Cup is surely an emotional one. The question is, will you willingly climb on that rollercoaster?

Dr Lisa A Williams is a lecturer in the UNSW School of Psychology.

Think before you wink

Can Australia win the World Cup? The science of predicting the champion