Catching the attention of females in a darkened rainforest amid a blur of windblown vegetation is no easy task, but male Anolis lizards on the island of Jamaica have evolved an ideal visual technique. 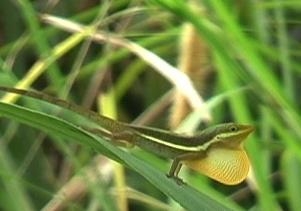 Catching the attention of female lizards in a darkened rainforest amid a blur of windblown vegetation is no easy task.

But male Anolis lizards on the island of Jamaica have evolved an ideal visual technique – very rapid extension and retraction of a large, coloured pouch under their throats, combined with quick bobbing of their heads to warn off any other rival suitors.

Now the mystery of why their close relatives on the neighbouring island of Puerto Rico do not adopt the same strategy to advertise their ownership of a territory has been solved.

The study, led by UNSW’s Dr Terry Ord, is published in the journal Functional Ecology.

The research shows the Puerto Rican lizards lack the right physiology to be able to perform the rapid movement of the conspicuous pouch, or dewlap. They can still compete successfully, however, in the same way that being either a sprinter, or a long-distance runner, can have different advantages.

“Puerto Rican Anolis have evolved a range of alternative strategies for enhancing detection of their displays, such as tailoring the speed and duration of their displays to match conditions in the forest, and timing their display to avoid periods of high visual noise,” said Dr Terry Ord, of the UNSW School of Biological, Earth and Environmental Sciences.

Dr Ord said his team was very surprised when they first discovered the Anolis lizards on Puerto Rica did not rapidly extend their dewlap, like their Jamaican cousins.

“We had previously used realistic-looking robot lizards in the forest to show that rapidly extending the dewlap, like a colourful flag, is a very effective territorial display amidst all the distractions of the rainforest.”

For the latest study the researchers developed a mathematical model of the biomechanical properties of the lever mechanism that controls dewlap extension. They then dissected museum specimens of lizards to study their anatomy and compare this with their behaviour in the forest, as recorded on video.

“Lizards on Puerto Rica that do not rapidly extend their dewlaps have biomechanical constraints that restrict them from doing this at the right speed. Because of this, they extend the dewlap at considerably slower speeds and instead rely on other strategies to maintain an effective display,” Dr Ord said.

“Research on the evolution of communication and sexual ornaments has rarely been carried out in this “bottom-up” way of seeing how the anatomy of a signal shapes the way that the signal is used in communication. But our study shows it has the potential to be critically important in truly understanding why animals behave – and evolve – the way they do.”

There are more than 400 species of Anolis in the Caribbean and Americas, making them of particular interest to scientists studying how species evolve.

Videos of lizards at: www.youtube.com/terryjord