While their friends at home have been sweltering, UNSW scientists, including PhD student Geoff Sims, have just spent five nights camping out in Antarctica in temperatures as low as minus 45 degrees. 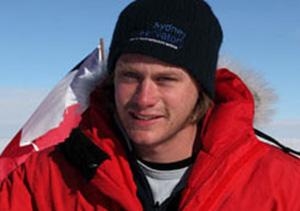 Geoff Sims, a PhD student in astronomy, at the South Pole

BLOG: While their friends at home have been sweltering, UNSW scientists have just spent five nights camping out in Antarctica in temperatures as low as minus 45 degrees.

A UNSW team, including Geoff Sims - a third year PhD student in astronomy - and Emeritus Professor John Storey, have travelled to an isolated part of the white continent, known as Ridge A, to service a robotic observatory installed there last year.

At 4000 metres elevation, Ridge A is the driest place on earth, and one of the coldest.

“We are now enjoying the warmth of the South Pole,” Geoff reported yesterday after returning there from six extremely cold days in the field, sleeping in tents.

A daily blog of the expedition to the isolated Ridge A, which is more than 900 kilometres from the pole, is available here.

The autonomous PLATO-R observatory was installed in January last year by an Australian and American team led by UNSW’s Professor Michael Ashley and Dr Craig Kulesa of the University of Arizona.

Water vapour in the atmosphere strongly absorbs terahertz radiation from space, so this light does not usually reach the ground.

But the dryness of Ridge A means it reaches the ice there, so the observatory’s telescope, HEAT, or High Elevation Antarctic Terahertz telescope, can study the life cycle of gas, dust and stars in the Milky Way galaxy at this frequency.

The task for this year’s expedition members, who include engineers Nic Bingham and Daniel Luong-Van, is to refuel the observatory, replace its engines and exchange the existing telescope with an upgraded version.

The expedition, which left on December 17, is the 12th trip that Professor Storey has made to Antarctica.

His blog entries record some of the unusual difficulties he faces: “I must remember to trim my moustache tonight, because when it freezes to my beard I can't open my mouth anymore,” he writes.

Geoff posts many photographs including of his first spectacular view of the active volcano, Mt Erebus, and his first encounter with the local fauna.

“We saw a number of rock-like objects on the snow. Turns out they were Weddell seals,” he writes while at McMurdo Station.

“We thought they were pretty cool until we saw a number of smaller rock-like objects in another area of ice. About 25 Adelie penguins seemingly appeared out of nowhere and started marching towards us.”

Professor Storey also notes that “you meet some really interesting people in Antarctica”.

One such person was Scott Parazynski, a former NASA astronaut who has climbed Mount Everest as well as made five Space Shuttle missions, and who inspected the team’s equipment while visiting the South Pole.

The expedition is due back in Sydney by the end of the month.