Marine ecologists in Sydney have restored a once thriving seaweed species, which vanished along a stretch of the city’s coastline during the 1970s and 80s. 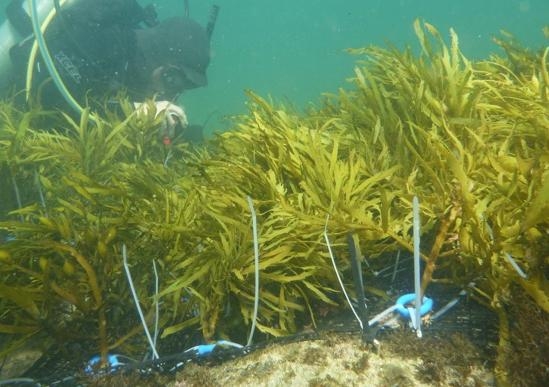 Transplanted seaweed is attached to a reef by a team member

Marine ecologists in Sydney have successfully restored a once thriving seaweed species, which vanished along a stretch of the city's coastline during the 1970s and 80s when there were high levels of sewage.

A team of researchers from UNSW, the Sydney Institute of Marine Science and the NSW Department of Primary Industries has transplanted fertile specimens of the missing crayweed (Phyllospora comosa) onto two barren reef sites where it once grew abundantly.

They took seaweed from Palm Beach and Cronulla and transplanted it to Long Bay and Cape Banks. Their results are reported in the journal PLOS ONE.

“Seaweeds are the ‘trees’ of the oceans, providing habitat structure, food and shelter for other marine organisms, such as crayfish and abalone,” says lead author, Dr Alexandra Campbell, from the UNSW Centre for Marine Bio-Innovation.

“The transplanted crayweed not only survived similarly to those in natural populations, but they also successfully reproduced. This creates the potential for a self-sustaining population at a place where this species has been missing for decades,” she says.

Large brown seaweeds – known as macroalgae – along temperate coastlines, like those in NSW, also encourage biodiversity and are important to the region’s fishing and tourism industries.

However, these seaweed ecosystems face increasing threats of degradation due to human impacts and ocean warming. The authors say the potential environmental and economic implications of losing these habitats would be comparable to the more highly publicised loss of Australia’s tropical coral reefs.

In 2008, researchers from UNSW and the NSW Department of Primary Industries (DPI) showed that a 70 km stretch of this important habitat-forming crayweed had vanished from the Sydney coast decades earlier, coinciding with a period known for high levels of sewage.

Despite improved water quality around Sydney after the introduction of better infrastructure in the 1990s, which pumped sewage into the deeper ocean, the 70 km gap of depleted ‘underwater forest’ – between Palm Beach and Cronulla - has never been able to recover naturally.

Now, with some well-executed intervention, it looks as though this habitat-forming crayweed could make a successful comeback in Sydney’s coastal waters.

“This kind of restoration study has rarely been done in these seaweed-dominated habitats, but our results suggest that we may be able to assist in the recovery of underwater forests on Sydney’s reefs, potentially enhancing biodiversity and recreational fishing opportunities along our coastline.”

The researchers say their results could provide valuable insights for restoring similar macroalgae marine ecosystems in Australia and globally, but further research is needed to understand the complex processes that affect recruitment and survival.

This project was funded in part by a grant from the NSW Recreational Fishing Trust.