Recreational sailors who become “citizen oceanographers” could provide vital scientific knowledge about the world’s oceans by sampling remote waters from their yachts, according to UNSW-led team of researchers. 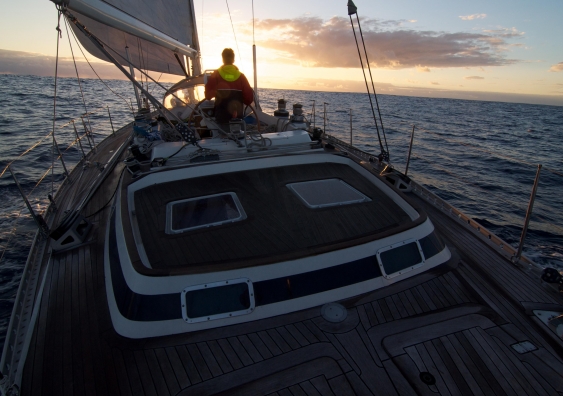 Recreational sailors who become “citizen oceanographers” could help provide vital scientific knowledge about the world’s oceans by sampling and testing remote waters from their yachts, according to a UNSW Australia-led team of researchers.

In 2013, Dr Federico Lauro, a UNSW microbiologist and national sailing champion, led an international scientific expedition across the Indian Ocean aboard S/Y Indigo V, a 61 foot  (18 metre) sailing yacht, to pioneer this method of data collection.

Indigo V Expeditions, involving researchers from 12 institutions in Australia, Canada, Singapore, Denmark and the US, demonstrated that this cost-effective approach can work.

During the 6500 nautical mile “proof of concept” voyage from South Africa to Singapore, the team regularly took measurements and collected samples of tiny marine microbes from the specially equipped yacht.

The four-month long expedition cost less than two days of ship-time aboard an oceanographic research vessel.

“The world’s oceans are largely unexplored and we have a shortage of oceanographic data because it is financially and logistically impractical for scientists to sample such vast areas. But with the right equipment, citizen scientists could gather large quantities of information as they sail around the world,” says Dr Lauro, who is also an Associate Professor at Nanyang Technological University in Singapore.

His team outlines their proposal for crowdsourcing the collection of ocean data in an article in the journal PLOS Biology. They say sailors are well suited for the endeavour because they are motivated by their love of sailing and “knowledge of the beauty, power and vastness of the world’s oceans”.

The thousands of yachts at sea each year could form a global monitoring network, collecting temperature and conductivity measurements, monitoring the weather, and recording sightings of debris.

Participating cruisers would also collect samples of the tiny marine microbes, including bacteria and plankton, which are the foundation of the food web and vital indicators of the health of the oceans.

“They are the most abundant organisms in the ocean and perhaps the most vulnerable in a changing global ocean,” says Dr Lauro.

Microbes in the oceans have a vital role, recycling nutrients and producing oxygen for the entire planet, says co-author and lead expedition scientist Professor Joe Grzymski, of the Desert Research Institute in Nevada.

“If the oceans are in peril, mankind is in peril. With the world’s population on the rise, now more than ever, understanding the global ocean microbiome health is an urgent priority,” he says.

During the 2013 voyage the team established a baseline of data from the Indian Ocean and developed instrumentation called the Ocean Sampling Microbial Observatory that promises to significantly advance the field of oceanography.

The researchers point out that Charles Darwin was the most celebrated “citizen oceanographer”, developing his evolutionary theory while sailing the world on the HMS Beagle.