Opinion The end of Kepler would be a huge loss

The stricken Kepler space observatory has been the most revolutionary facility astronomy has seen in more than two decades and it is vital it be restarted, writes Professor Chris Tinney. 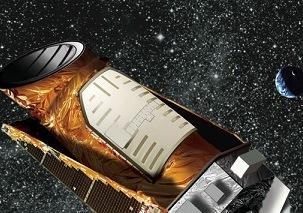 OPINION: As I write this, engineers at NASA and Ball Aerospace & Technologies have their fingers crossed they’ll be able to restart the stricken Kepler space observatory, which has been in hibernation mode since May 15. If they can’t, the telescope’s haul of planet candidates – 3,277 at the last count and including many Earth-like systems – might have come to an end.

Kepler has been idling roughly 64 million kilometres from Earth since the failure of one of its reaction wheel 4 – one of four mechanisms used to orient the spacecraft and stabilise its gaze. The plan, by no means assured of success, is to try to re-engage either the stalled-out wheel 4, or another that failed shortly after launch in 2009.

If this doesn’t work, the loss will be huge.

Kepler has been the most revolutionary facility the science of astronomy has seen in more than two decades. It’s hard to get across to other astronomers – let alone the general reader – just how exquisitely Kepler measures the amount of light coming from its target stars as it searches for the tiny repeating dips in that light that reveal the presence of an otherwise unseen planet.

But Kepler leaves the rest of us in the dust. It measures its target stars at precisions of ten parts-per-million or better. That’s 0.001%, or 100 times better than the mere “gods” of ground-based photometry can do.

And Kepler must reach those levels of precision if it’s to achieve its primary mission goal – detecting Earth-like planets orbiting sun-like stars.

Earth-like planets, you see, are very, very small. And stars are very, very big. So the amount of star light blocked by an Earth-sized planet is just a tiny (and not entirely coincidental) 10 parts per million, which has allowed Kepler to give us our first, albeit indirect, glimpses of other “Earths”.

One of Kepler’s key strategies for success has been to carry out its observations in as “differential” a fashion as possible – that is, the satellite looks at a set of stars hour-after-hour, day-after-day, week-after-week, for periods of up to three months.

In that time it tries to keep absolutely everything about the satellite the same, so the only thing that varies is the brightness of the stars.

And that requires keeping the telescope pointed at the same patch of the sky to a very high level of precision. This is done with the aid of its “reaction wheels”, two of which are shown in the picture below.

By having a small wheel spin rapidly in one direction, the balancing nature of angular momentum will slowly spin the rest of the satellite in the opposite direction. By using three of these wheels in combination, it can turn itself in any direction or, more critically, make small adjustments to stay accurately pointed at the same part of the sky without moving.

But the trick is, it needs three functional wheels. Two just doesn’t cut it – and sadly two is what it has right now.

NASA (having some experience with hurling widgets into space) wisely designed Kepler with an additional, redundant reaction wheel – wise because, soon after launch in 2009, one of those four wheels failed.

The Kepler mission was originally designed to be five years long, but has been so successful it was extended last year to a total mission of seven years. So for the past four years everyone concerned has held their breath, hoping nothing untoward happened to the other wheels for at least another three years.

Sadly, as we now know, a second wheel failed in May. As a result, NASA placed the satellite into what’s known as Point Rest State – a state that minimises fuel usage. Then a lot of engineers sat down to have a really good think about what to do next.

John Troeltzsch of Ball Aerospace & Technologies was quoted this week as saying:

We are just going to try to move the wheels in the opposite direction from where they were going when they stopped working. If we can get it moving freely, we can spin it for a while and let it coast to a stop. Then we can understand the level of friction.

Having the wheels operate in the way they did before the stall was unlikely, Troeltzsch added, before pointing out the obvious, that:

We can’t send a repair man out.

Astronomers acknowledge successfully restarting the wheels will be a long shot, but there really aren’t any other options.

Kepler’s current four-year mission is the absolute minimum needed to detect small planets in roughly one-year-long orbits. Extending that mission to seven years is critical to shrinking the large range of potential planet frequencies allowed by the current data, and nailing down just how common Earth-like planets really are.

So please – like the engineers – do all keep your fingers crossed.