Opinion Gender segregation in e-sports is indefensible. And yet …

The International e-Sports Federation has come under intense scrutiny – and criticism – for its segregation of female competitors in videogame competitions, writes Michael Kasumovic. 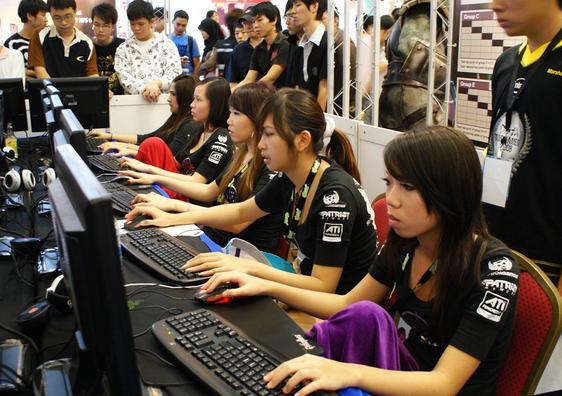 What if a new competitive sport came along where physiological differences were virtually irrelevant to contest outcomes? goInternationalgroup/Flickr, CC BY-NC

OPINION: You likely couldn’t outswim Alicia Coutts or Ian Thorpe, or lift half of what Damon Kelly or Seen Lee can, but I bet you could beat them at a videogame.

Welcome to e-sports, the future of competitions where size, shape, or even gender no longer matters. Or at least, it shouldn’t.

In July, the International e-Sports Federation (IeSF) came under intense scrutiny – and criticism – for its segregation of female competitors. Players argued that gender held no importance in a digital competition and, more importantly, that there were no “boy” or “girl” games.

But, in a sport dominated by men, what should the federation do to ensure that the number of professional female gamers grows as videogames increase in popularity?

E-sports are competitive videogame competitions in which players compete on the digital battlefield. The mandate of the IeSF is to legitimise video game competitions as a “true sport beyond language, race and culture barriers”.

The IeSF’s first decision to ensure legitimacy as a sport was to segregate men and women in competitions. How else, they argued, would the sporting world take them seriously if they allowed men and women to compete against one another? To make matters worse, men and women wouldn’t play the same games.

But why is segregation synonymous with serious sporting endeavours? Let’s examine some of the differences between men and women.

When looking at the average male and female human body, we immediately notice differences in body shape, the placement of fat reserves, and overall muscle-mass. What can this this tell us about our evolutionary history and what shaped the sex differences on our bodies?

Unfortunately, very little, but when compared to other species, we can gain some interesting insight.

In many mammals, while males are more ornamented, females are larger because they bear the costs of rearing offspring, and larger females can carry greater energy reserves.

At the other extreme, we have species such as elephant seals and red deer whereby males compete intensely (and often fatally) for females. In such species, males are much larger and stronger than females.

Humans fall somewhere between these two extremes. The female body is a result of selection for optimal offspring care, but that included being mobile to be able to gather food. Men competed for access to resources, but competition also involved maintaining coalitions. As a result, we have relatively similar body shapes and sizes compared to other mammals.

But physiological and psychological studies add an interesting layer, highlighting differences in aggression and dominance. Thus, given both outward appearance and physiological differences, it’s not surprising we gender-segregate as these differences can result in unfair competitions.

But not all sporting outcomes are based solely on physical strength. In sports such as the discus throw, where technique and finesse are more important, women outperform men.

What if a new competitive sport came along for which outward appearance and physiological differences were virtually irrelevant to contest outcomes? Where winning is instead determined by cognitive capacity and reaction time.

Should we still hang on to historical segregation?

Although there is evidence the brains of men and women differ in the genes that are expressed, we have no idea what this means – if anything – in real-life cognitive performance.

Although men outperform women in spatial tasks, both sexes improve with practice and improvement is greater for those with poorer spatial skills. In fact, this gender difference disappears in just ten hours of videogame training.

And when it comes to reaction time, although men are faster, women are more consistent, and videogame play also improves reaction time performance.

Now, let’s head back to the IeSF.

The IeSF had an emergency meeting to respond to the backlash against its decision to gender-segregate, but there was one enormous problem. Although men and women may not differ in cognitive ability, they differ in their participation – there are many more male professional gamers.

The IeSF argued this is a more insidious problem because the male-biased population leads to a boys only mentality.

This idea is confirmed by the sexist arguments of a subset of gamers over the past few months in the #gamergate controversy and overall treatment of outspoken women in the gaming community, such as Anita Sarkeesian.

So how could the IeSF ensure women are comfortable in a male-dominated environment?

Its answer was to open up the competition to all genders, but also maintain a female-only competition.

This, they argued, would allow women to compete against men if they wanted to, but also provide a comfortable atmosphere for women in the hope of increasing the number of professional female gamers. Once this population increased, segregation would no longer be necessary.

Unfortunately, there are two problems with this response.

Fair play for all

First, players in female-only competitions still compete in a different subset of games. This suggests to women that not all games (and gamers) are equal. Moreover, when they feel comfortable enough, they can shift over and play more masculine games.

But switching games would be like switching sports, and you don’t see professional players doing this successfully (yes, I’m talking about you Michael Jordan). That’s because a different subset of skills are required to succeed. Professional video gaming is no different.

Second, it brushes the problem under the rug, implying there is nothing else they can do until women take gaming into their own hands.

Regardless, videogame competitions have a massive future – viewership of professional gaming grew 334% in 2012. The DOTA 2 International 2014  now offers just shy of US$11 million in prize money, with first-place alone garnering more than US$5 million. So whether you consider videogaming as a legitimate sport or not is almost irrelevant.

Rather than seeking legitimacy by enforcing historical segregation, the IeSF should truly embrace its mandate and provide completely equal gaming spaces.

It is heading in the right direction, and if it continues doing so, the IeSF could be leading all sports in the recognition that all individuals, no matter their race, culture or gender, should have the right to compete against one another.

Michael Kasumovic is a lecturer, and ARC DECRA Fellow at UNSW.