Sydney schoolgirls, with the help of UNSW scientists, have identified a solution to the annual problem of Christmas trees turning brown and dying before festivities end. 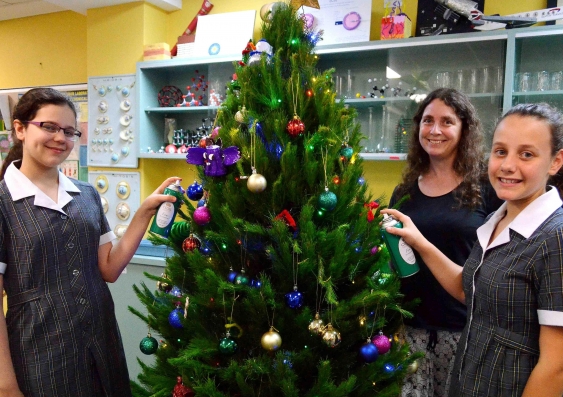 Sydney schoolgirls carrying out a research project with UNSW plant ecologists, Professor Angela Moles and Dr Julia Cooke, have identified a possible solution to the annual problem of Christmas trees turning brown and dying in the middle of the lounge room.

They found that spraying the plant with hair spray keeps it healthier and looking good for longer, and have prepared a scientific paper on their novel findings that they hope to have published.

The year 7 science class from Kambala in Rose Bay used a light-emitting instrument to test the health of branches of Pinus radiata, or Monterey pine – the species cut down for Christmas trees in Australia and New Zealand.

They monitored the mini-trees for almost a month under a variety of conditions chosen by the girls, including putting them in a container of beer or energy drink, rather than water.

“The beer and energy drinks turned out really badly. The plants went brown very quickly and were not very festive at all,” says UNSW’s Professor Moles, an award-winning plant ecologist who worked with the students as part of the Scientists in Schools Program run by CSIRO.

“But the hair spray group were healthier than the control plants that were just kept in water. They even started sprouting fresh green needles,” she says.

Professor Moles speculates the hairspray may work by preventing the plants from sensing chemicals from decaying branches which could trigger more decay – just as one rotten apple in a bowl turns the others rotten.

“Or it may be that the hair spray simply blocks the pores in the leaves, keeping the moisture in,” she says.

Kambala student, Isabella Spagnardi, 13, said the result surprised her. ”It was a really interesting experiment because we could all have a go and try lots of different treatments. But I could never have pictured that hair spray would be good for keeping a Christmas tree alive.”

The girls divided 50 branches into five groups of 10 and studied them for 27 days. The five experimental conditions were tap water, beer, energy drink, hot water, and water with hairspray applied to the plant.

They monitored the photosynthetic health of the leaves using an instrument that applies a pulse of light to measure how efficiently the pine needles convert light energy into chemical energy.

“It was great to see young girls so enthusiastic about a project and interested in science,” says Professor Moles.

The project was carried out with the assistance of Kambala Head of Science, Nikki Zimmerman.

In 2013 Professor Moles was awarded one of the Prime Minister’s prizes for science – the 2013 Frank Fenner Prize for Life Scientist of the Year.