Opinion Of heads and headlines 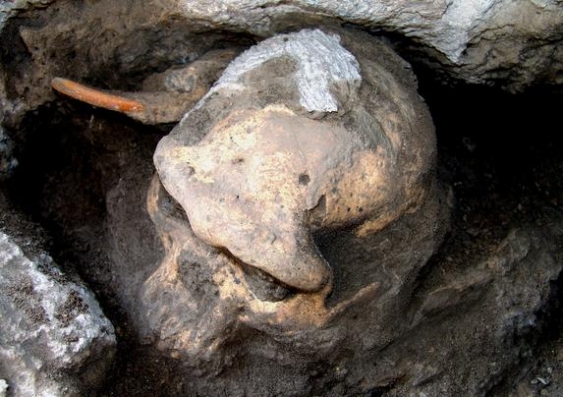 OPINION: A newly discovered 1.8 million-year-old skull from Eastern Europe has been pitched as disproving a decades-old paradigm in human evolution.

Its discoverers claim the find sinks more than a dozen species into a single evolutionary line leading to living people. But the new study highlights the propensity of some anthropologists to overstep the mark, interpreting the importance of their finds in a way that grabs the headlines.

The more-than-150-year history of human evolutionary science is filled with many remarkable and headline-grabbing episodes.

But today’s article in Science by David Lordkipanidze and co-workers is going to make an even bigger splash, by challenging a well-established paradigm.

They described and compared a new skull from the Dmanisi site in Georgia, dated to around 1.8 million years old. It is one of five skulls in varying states of completeness. The latest one (“Skull 5”) is well preserved and includes a matching lower jaw.

Until now, it was generally accepted that some of the Dmanisi skulls probably came from different species.

However, Lordkipanidze has said previously that all of the human remains from Dmanisi are a single group, perhaps killed in a natural disaster. This is possible but difficult to substantiate, because of errors in dating methods.

Using three-dimensional computing, this new study now also claims the differences in “shape” among the five ancient Dmanisi skulls is no more pronounced than observed between five living humans or five chimpanzees.

This is despite the fact that when the anatomical features (such as the eyebrow bone) of the skulls have been examined by experienced biologists rather than abstract computer methods, researchers like Jeffrey Schwartz have suggested that the Dmanisi sample contains multiple species.

But here’s the potential killer blow for anthropology. Lordkipanidze and colleagues say their work shows the entire early fossil record for Homo – comprising perhaps nine species dating between about 2.3 and 0.5 million years old – is in fact a single long-lived group.

All of them would now be sunk into Homo erectus according to the study findings.

Their work also has major implications for later Homo, implying that a further six species should all be sunk into our kind, Homo sapiens. The species no longer required would be: Homo heidelbergensis, Homo rhodesiensis, Homo antecessor, Homo neanderthalensis, Homo helmei and Homo floresiensis.

So, the entire ~2.4 million years of evolution of the genus Homo comprises, this new study proposes, at most two species: Homo erectus and Homo sapiens. These would both belong to a single evolutionary line rather than being separate twigs within a bush of species.

Most anthropologists would currently recognise at least nine and up to 17 species of Homo, so the pruning would be about as radical as one can imagine!

These latest suggestions about the lack of diversity within our evolutionary group hark back to the mid-20th century ideas of the evolutionary biologists Theodosius Dobzhansky and Ernst Mayr.

Dobzhansky wrote in 1944: there is no reason to suppose that more than a single hominid species has existed on any time level in the Pleistocene.

Well, Dobzhansky and Mayr got it wrong. Mayr admitted this later in his career in response to the many dramatic fossil discoveries made from the mid-1960s onwards, especially in Africa.

The Dobzhansky/Mayr scenario is known as the “single lineage hypothesis” and the new research by Lordkipanidze and colleagues – a new version of it – implies that even this long-disproved idea exaggerated diversity in our tree.

End of a paradigm?

There are a number of things that stand out to me as worrying about the new Dmanisi research.

I don’t doubt the broader significance of the fossils or their worthiness of Science treatment. But I find the claim of a single evolutionary line, comprising one or two species of Homo, to be wildly premature.

This headline-grabbing approach to publication has become one of the pitfalls of modern academia. Let me explain.

Articles in journals like Science and Nature are highly sought after by universities around the world. This is in part because of the current obsession with international league tables. Some use the number of Science and Nature papers published as a criterion for judging quality.

If our senior peers deem our work good enough to be published in Science or Nature, we join the ranks of a select few. Our academic careers can benefit greatly from the high exposure these journals enjoy.

So there are reasons why a researcher would aim for the kind of headline-grabbing study Science would publish. But the scenario of human fossil diversity is now well founded and receives widespread support from the fossil record as well as broader evolutionary theory: throwing it out at this point would seem a tad hasty.

Revealing also is the article’s acknowledgement of a major contradiction between their 3D virtual skull shape analyses – suggesting very low species diversity – and their studies of anatomical features – which indicate very high species diversity in Homo.

In my experience, 3D approaches often fail to detect the subtleties of species differences, especially among genetically closely related groups like the species of Homo.

3D studies of skulls can be like comparing apples and plums: both are fruit, and spherical, but they have very distinct evolutionary origins and histories. If the quality you’re interested in is sphericity, then fine, but otherwise it’s a very blunt tool.

In contrast, anatomical characters are the mainstay in the description of species as well as for establishing evolutionary relationships, and are used right across the biological sciences.

To favour 3D results over anatomy seems to me to be highly selective and unjustified. In my experience, we should use both. Had they done so, the latest Dmanisi story might have been very different.

A question of inheritance

The shape and size of skulls is greatly affected by the environment as they grow during childhood, and although many genes are involved in the process, their influence seems to generally be quite small.

The later in life growth stops, the more influence the environment exerts over its final size and shape. Skull form can be greatly altered by poor nutrition or disease or even heavy use of a structure (like the jaws) at crucial times in childhood.

Studies also show that the environment, rather than genetics, probably plays a large role in determining the final shape of the skull as revealed with 3D tools.

In contrast, many anatomical features of the skull, especially features of the face like chins or eyebrow bones, are routinely used to diagnose species in the human fossil record. They tend to be subject to greater genetic and less environmental influence during growth.

A related problem here is “homoplasy”. This describes a situation where features are acquired by two species through separate evolutionary events, and not inherited from a shared (common) ancestor. These features are notoriously difficult to identify, can’t tell us about evolutionary history or relatedness, and are a source of error.

While such features can be strongly heritable or environmentally influenced, 3D analyses give equal weight to all traits, and so can be misleading. Homoplasy is not distinguished from genuine and evolutionarily informative traits.

Homoplasy is a well-known problem that confounds interpretations of the human fossil record. You ignore it at your peril.

Keeping the baby and the bath water

There are important lessons to be learnt here. By all means use 3D techniques, as they offer exciting new ways to explore and quantify biological form. I use them myself and they can potentially deepen our understanding of evolution when deployed in the right way.

But, to do so in a way that is divorced from basic biology is little more than an exercise in “black box” science.

The paradigm of diversity for human evolution will remain intact despite the new Dmanisi discovery. It’s unlikely to be thrown out just yet, let alone on account of a single skull or a trendy statistical technique.

Dmanisi is a very important site and its fossils crucial to properly understanding the course of human evolution. The variation seen among the five skulls without doubt has something to tell us about evolution. But it’s not the yarn being spun by the latest headline-grabbing Science article.

I think it’s a shame that the importance of the find, as with Australopithecus sediba, will now be overshadowed by protracted debate about exaggerated interpretations and hyperbole.

While such controversies are not unique to anthropology – think of the ENCODE junk DNA debate earlier this year – the discipline does have a rather long history of them.

Associate Professor Darren Curnoe is a specialist in human evolution at UNSW.