Discoveries in human evolution, such as the Australopithecus sediba remains, get a disproportionate amount of attention in science journals and the media, writes Associate Professor Darren Curnoe. 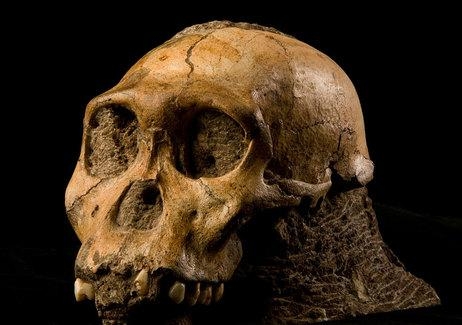 OPINION: It’s probably a truism to suggest that the study of human evolution gets more that its fair share of media attention and hype.

There’s more on the way this week, with a set of seven papers out in the journal Science providing new details about the anatomy and evolution of almost 2.0 million-year-old Australopithecus sediba specimens from South Africa.

The find raises many questions about the scientific and public prominence of human evolution research and about the remarkable and unprecedented space provided to sediba in one of the scientific establishment’s top journals.

Many of my palaeontology and evolutionary biology colleagues wonder why it is that fossils belonging to the human evolutionary bush (“hominins”) get so much space in prestigious scientific journals like Nature and Science when sometimes scientifically more significant discoveries struggle to get a look in at these high profile outlets.

I think they have a good point to make.

The sediba skeletons, for example, have already had seven Science papers and one Nature article, making a total with today’s papers of 15 in these prestigious journals since they were announced in 2010!

Actually, this is unprecedented even in palaeoanthropology and I would imagine in most (if not all) scientific disciplines.

No other discovery has had even close to this amount of space in prestigious journals in the 150+ year history of the field.

Arguably, many of them were more important than sediba: like the Taung Child in 1925, or Australopithecus afarensis (Lucy’s kind) in the 1970s, or more recently, Homo floresiensis.

As someone who hasn’t yet broken the Nature or Science glass ceiling, I run the risk of being accused of “jealousy” – the standard reply to this sort of criticism in science – for suggesting this to be excessive.

Yet, I think that discoveries in human evolution do get a disproportionately large amount of both prestigious scientific journal space and media attention, and that sediba seems to take the cake in the long history of my field!

To be frank, I think science is the poorer for it as it trivialises other (more important) finds, and places way too much emphasis on humans, as though we are special or should be the main focus of most scientific endeavours.

Journals like Nature and Science have wide briefs that emphasise the general impact of findings across science.

I find it difficult to accept that any fossil human discovery is so wide reaching, its implications unprecedented, that it warrants 14 Science papers.

In fact, I’m hard pressed to think of any discovery that would be so wide reaching or important.

A few possibilities spring to mind:

In fairness to the authors of these seven new papers, the discovery is an important one and they deserve full credit for their commitment to publishing details of their discovery quickly, and in such detail.

A long-simmering debate in human evolutionary studies has been whether funding agencies should place time-frames on the publication of publicly funded research.

Some scientists have been accused of sitting on their finds for decades, being in no hurry to publish.

I certainly don’t think the team working on sediba can be accused of tardiness, as the speed of publication of the work is probably also without precedent.

Moreover, the recent work is largely of a high standard, and many of the interpretations offered are reasonable and exciting in themselves.

Yet, one can’t help but feel that the sediba team has a point to make; one about the purported significance of their find, which the editors of Science in particular have obviously lapped up.

Clearly its one we will have to disagree on. And one that I feel is greatly exaggerated.

Find of the 21st century?

Senior researchers in the sediba team now have even more papers in prestigious journals than historically leading scientists like Time Magazine’s “Person of the Century” Albert Einstein!

History surely shows that his ideas had some of the most far-reaching impacts socially and culturally of all scientists of all time?

Again, few finds in the history of palaeoanthropology come even close.

So, just what have they found with sediba? Why is it apparently so significant that it has warranted 14 Science and one Nature paper(s) in the past three years?

The two partial skeletons – one adult and one juvenile – offer a rare glimpse into the anatomy of our ape-like australopithecine forebears.

Many bones are present that are rare or missing for other species.

It was alive at the same time as early members of the human genus (Homo), including large-bodied species like Homo ergaster, as well as species of the specialised, large-jawed, genus Paranthropus.

Moreover, its skeleton seems to have been largely adapted to tree climbing and its hands lacked the grasping ability seen in Homo.

Yet, its spinal column shows clear evidence for upright posture and locomotion on the ground and shows some similarities to later Homo species like Homo ergaster/erectus.

In fact, its style of walking seems to have been unique among all australopithecines: all hominins in fact!

Futile quest for a holy grail

Finding the direct ancestor of humans has historically been the “holy grail” of palaeoanthropology.

It is a claim made by many leading figures in the field during its long history, but it’s impossible to test in a rigorous way.

All researchers who have made the claim have been shown to be wrong by history or simply can’t have their claims substantiated other than by informed opinion.

The unusual mixture of ape-like and human-like features in sediba – unprecedented in the genus Australopithecus – has been interpreted as evidence that it might have been the immediate ancestor of Homo, and therefore, of living humans.

Well it might, but there are other explanations deserving of greater attention, such as parallel evolution (independent evolution of similar traits from a common ancestor).

Its young age is one of the main criticisms against this hypothesis, especially given that Homo actually begins at least 2.3 million years ago and in East Africa.

Moreover, new work presented in the newly published articles show that it is no more likely than Australopithecus africanus (the Taung Child’s kind) to occupy this position.

The new papers show convincingly that Australopithecus sediba has a peculiar anatomy that is likely to reflect a unique lifestyle, ecology and evolutionary history.

This should convince many critics – including (previously) me – that it indeed represents a new species in the family tree.

There are, however, good reasons to be sceptical about claims that sediba is the ancestor of Homo. Some of them are socio-historical and others are scientific.

In the end, I don’t think we will ever be in a position to make such assertions about any fossil with confidence, and we ought to be suspicious of anyone who claims otherwise!

This shouldn’t take anything away from the importance of the skeletons.

But at the same time, I fail to see why the finds represent some of the most important discoveries in the history of science, as one might suppose from the space devoted to the research in Science in recent years.

Associate Professor Darren Curnoe is in the School of Biological, Earth and Environmental Science at UNSW.