It won't be easy, but in future astro-archaeologists may be able to glean that life once existed on Earth from the stellar remnants of our sun, writes Dr Lucyna Kedziora-Chudczer. 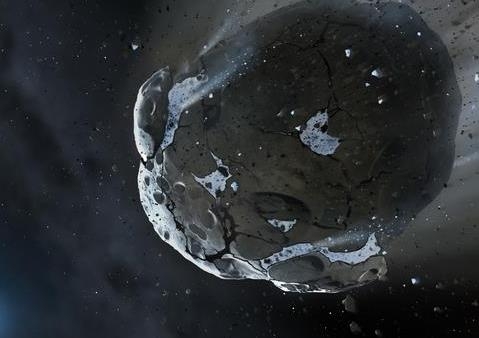 Water-rich asteroids likely delivered the bulk of water on earth. Mark A. Garlick

OPINION: How will future alien scientists know whether life existed in our solar system? One method may be to sift through the planetary debris left when our sun becomes a white dwarf.

Astronomers are doing just that with a far-distant white dwarf, GD 61; in research they’ve published today in Science they point to an unusually high amount of oxygen among the debris, and discuss what that might mean for life outside our solar system.

In the very distant future our sun will run out of fuel and, after billions of years of spectacular evolution, it will turn into an extremely hot stellar remnant, a white dwarf. Almost half its current mass will be squeezed into a volume slightly bigger than the Earth.

Before reaching that stage the sun will gradually brighten and first become a red giant, with dire consequences for life on our planet.

Turbulent events in the final phases of solar evolution will obliterate our inner solar system, leaving behind only the giant planets and their numerous moons. If our star is merciful in this monstrous phase, then the asteroid belt might just survive as well. No guarantees.

Given all this cosmic devastation, would future astro-archaeologists even be able to recognise that life once thrived in this stellar system? Or would there be no memory of a long-gone rocky planet that once travelled in orbit around a much younger yellow star?

Peering into the throat of a white dwarf

Astronomer Jay Farihi, who studies white dwarf environments in the solar neighbourhood, believes we can learn a lot about the history of these objects and the planets that used to surround them.

Astronomers have found these dwarfs have warm disks of planetary debris around them. Those disks are likely to be the remnants of the dwarf’s most recent “meal”: planets and other bodies the dwarf has absorbed. Looking at the disk can tell us about the bodies that used to orbit the dwarf.

Farihi and his team have been looking at the peculiar white dwarf GD 61, a remnant of a slightly more massive star than our sun. Measurements with the Cosmic Origins Spectrograph (COS) placed on the Hubble telescope show an unexpectedly high amount of oxygen in its ultraviolet spectrum.

This isn’t an issue on its own: oxygen and carbon are both products of thermonuclear reactions in the core of a red giant, the phase of a star right before it turns into a white dwarf. But in the case of GD 61, the ratio of oxygen to carbon is much higher than expected. It is likely the oxygen came from debris recently engulfed by the star.

In a CSI-style forensic deduction, Farihi’s team sifted through the last meal consumed by GD 61. And they found that some of that excess oxygen must have been locked into water molecules within the swallowed debris.

But the only way water could even survive around the hot white dwarf is if it were buried deep within a rather large asteroid-type object of comparable mass to Vesta, one of the largest asteroids in our solar system. There is one similarly water-rich massive object in our solar system: the dwarf planet Ceres. Around 20% of its mass is composed of water ice.

Information about the distribution and abundance of water-enriched planets can help us search for habitable worlds outside our own solar system.

Currently only a small number of extra-solar planets have a solid detection of water vapour in their spectra. Most of them, such as HD189733b, are “hot Jupiters” where life as we know it cannot exist.

A more promising planet in terms of possible habitability is the famous GJ 1214b discovered during the MEarth search for extra solar planets.

It is only a few times heavier than the Earth. Its low density suggests it’s watery, with only 25% of its mass as rocky material. Observations of its almost featureless optical and infrared spectrum also suggest that GJ 1214b could possibly be a water dominated world.

But the composition of the “ocean” planet is still debated. Different models suggest it might just be a rocky planet surrounded by an extensive hydrogen-rich atmosphere.

How did Earth get its water?

Water from asteroids, like that swallowed by GD 61, may have been vital in the evolution of life on our own Earth.

The origin of water on Earth is still unclear. We know that in the solar protoplanetary nebula, before planets formed, water could only survive outside the “ice” line.

This marks the distance from the sun where temperatures are low enough for ices involving water, methane, ammonia and other volatiles to form. These ices became the main building blocks of giant planets and their moons, with only a small amount of rocky material included in these births.

The Earth formed in the much hotter region of the inner solar system so it must have been rather dry in comparison. Clearly the Earth’s water abundance by mass is much lower than that of objects in the outer solar system, but even this low amount of water could not have formed in the planet’s current location.

Most modern theories say Earth’s oceanic water came from somewhere else, most likely delivered from the outer regions of the solar system by either meteorites or comets hitting Earth in the early stages of planetary formation.

If the final stages of our solar system are anything like the GD 61 system, finding a substantial amount of material enriched in water in the debris surrounding stellar remnants should perhaps not be so surprising. Only such debris, originally formed on the outskirts of a stellar system far from the blazing heat of its parent star, have a chance of surviving the late stages of stellar evolution.

However, systems like GD 61 that show an overabundance of oxygen do not appear to be common. This is testimony to the rich diversity of continually discovered exo-planetary systems that are nothing like our own solar system.

Perhaps one day future astro-archaeologists will glean that life once existed around the stellar remnants of our sun. But it will certainly not be an easy task.

Dr Lucyna Kedziora-Chudczer is a postdoctoral fellow in astrophysics at UNSW.