Big is often better, but when spiders are of a similar size, a male's success can depend on whether he is a sprinter or a marathon runner, explains Dr Michael Kasumovic. 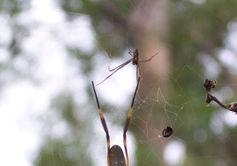 ANALYSIS: Big is often better, but when spiders are of a similar size, a male's success can depend on whether he is a sprinter or a marathon runner, explains Dr Michael Kasumovic.

Whether it’s two lions fighting over a pride or two butterflies fighting over a sunny spot, decades of nature shows have led the average watcher to conclude that bigger, stronger males win competitions.

But despite David Attenborough’s confident and assuring voice, research demonstrates it’s common to find smaller males out-competing larger males. In fact, the larger and more similar in size the combatants, the less of an accurate predictor size is.

But if it size isn’t the reliable predictor we always assumed, what other traits are important? My colleague Frank Seebacher and I – in research that was published today in Biology Letters – found that when male spiders were similar in size, a male’s success depended more on his physiological capacity than his size.

Along came a spider …

Just like the underlying differences in physiology between sprinters, marathon runners and the average individual, it seems that a spider’s internal physiology plays an important role in winning a mate.

Golden orb web spiders are part of an Australian summer. When walking or hiking along paths, it is common to find groups of females' webs in aggregations and males jockeying for the closest position.

Proximity to a female on her web is extremely important for these males as the closest males have the first opportunity to mate – first in, best-dressed really does ensure more offspring for males.

Although competition for position is intense, a male’s size doesn’t always declare him a winner. So, we collected 210 males and 12 females and decided to examine what they did. We released three females within an artificial 2.5m3 screened-in enclosure in a glass house at UNSW and released 12 individually marked, similarly sized males.

After an hour, we returned and collected the closest and furthest males on each female’s web and examined how physiologically capable they were.

By sealing males in airtight containers and using an oxygen meter, we could examine how quickly males were consuming oxygen when at rest. We then compared this to a male’s active metabolic rate by forcing males to exercise.

We did this by using a spinning magnetic bar to activate their natural prey-catching behaviour. Males that consumed more oxygen while exercising indicated a superior metabolic capacity.

Along with measuring their metabolic rate, we examined three different biochemical pathways to examine whether differences in metabolic rates could be attributed to differential energy production.

After collecting information on 36 spiders, we compared the winners against the losers and found some interesting results.

It’s what’s inside that counts

The winners and losers did not differ in their resting metabolic rate. But males that were physically closer to females had a significantly higher active metabolic rate. What this means is that winning males were able to ramp up their performance to a higher level when in competition.

We further found that this extra energy production was a result of an increased density of mitochondria – the energy powerhouses of the cell.

Our results demonstrated a strong link between an individual spider’s internal physiology and his potential fitness: a difficult connection to make. The male spiders that were closest to females were more like sprinters than marathon runners as they had the physiological capacity for burst activity that provides them with a competitive, and therefore fitness, advantage.

But unlike sprinters that need to train to improve their physiology, these differences may be determined during development. Male golden orb web spiders are developmentally plastic, which means they alter how they look in response to specific environmental triggers.

When developing around a high density of available females, males mature smaller and more quickly which allows them to locate and mate with females earlier. In contrast, when males are developing around more rival males, they take longer to mature larger to have the capacity to out-compete males.

Our new results suggest sexual selection has also shaped plasticity in underlying physiological traits. But we’ll have to complete more manipulative experiments to determine this conclusively.

For now, we’re happy to know we’ve eased the collective minds of all the little spiders (and maybe humans) out there.

Dr Michael Kasumovic is a lecturer in the School of Biological, Earth and Environmental Sciences.

Size does matter and so does researching why