A group of female dolphins has been learning from their mothers to use sponges to help catch fish for at least 180 years, a study has found. 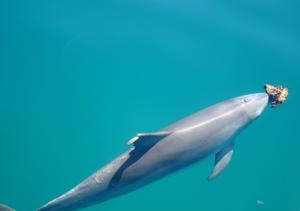 A group of female dolphins has been learning from their mothers to use sponges to help catch fish for at least 180 years, a UNSW study has found.

Dolphins in Shark Bay, Western Australia, were first sighted in 1984 carrying sponges on their snouts – or rostra to use the scientific name.  It’s believed the sponge helps protect their sensitive noses as they forage along the rocky sea bed, dislodging fish and crustaceans.

For decades it’s been a mystery why only about five per cent of dolphins in Shark Bay use sponges to forage, and why the behaviour hasn’t spread into other dolphin populations or disappeared.

Interestingly, she says the cultural behaviour seems to be passed down only along maternal lines – from mother dolphin to daughter dolphin. Male dolphins generally don’t do it, preferring to socialise in packs to hunt for fish.

“What they do is unique among dolphins,” Dr Kopps said. “It appears that this technique of using a sponge has been passed on from mother to daughter dolphin for around eight generations.

“We were interested in how long it has been passed on because it is rare for an animal species to pass learned tool use behaviour through several generations.”

She used computer modelling of behaviour and genetics to estimate how long the sponging behaviour has been going on in Shark Bay.

Dr Kopps concluded sponging among dolphins could have stemmed from one female dolphin that started doing it at least 180 years ago and passed the foraging technique down through her female descendants.

Her research with UNSW Professor William Sherwin has just been published in the journal Animal Behaviour.