Opinion Meet a real interstellar explorer – but its days are numbered

Australia’s Mopra telescope, nestled in NSW’s Warrumbungle National Park, is earmarked for closure in a year thanks to CSIRO funding cuts. But this one-of-a-kind telescope is well worth saving, writes Michael Burton. 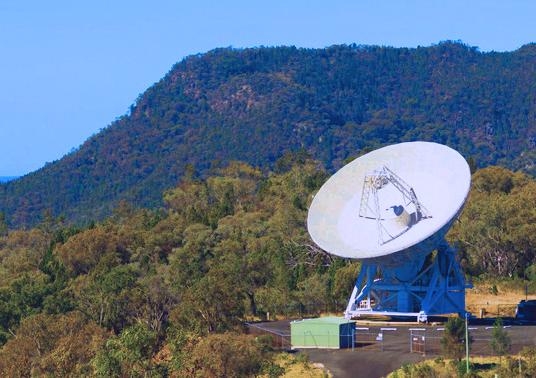 The Mopra telescope will find itself out of commission in a year. Balt Indermuehle, Author provided

OPINION: Australia’s Mopra telescope, nestled in NSW’s Warrumbungle National Park, is earmarked for closure in a year thanks to CSIRO funding cuts. But this one-of-a-kind telescope is well worth saving.

Few of us get the opportunity to explore space, yet the “last frontier” retains an aura of mystery that fascinates us. The film Interstellar not only is a Hollywood blockbuster, but also provides realistic simulations of what interstellar space might look like, at least if one has the misfortune to find oneself near a black hole. So what really is out there and how do we see it?

While the astronomer’s telescopes may not allow us to journey to space, they do let us peer out into the cosmos, to a realm dominated by stars and galaxies.

Mopra, located at the foot of Siding Spring Observatory, has a unique view of a section of our galaxy hidden from northern hemisphere sight. This remote outpost has been mapping the centre of the Milky Way for four years, but funding cuts only give it one more year to complete this massive task.

The southern galactic plane passes directly over Australia each night and contains the richest part of our galaxy, with its dynamic centre and the majority of the active star-forming clouds in its spiral arms.

Mopra is a radio telescope which measures interstellar gas between stars. This gas makes up 99% of the interstellar medium and provides the raw material for galactic evolution, driving the birth and death of stars.

These interstellar molecular clouds are the coldest environments in space, and may harbour the raw ingredients for life in the form of simple organic molecules. In the Milky Way, clouds of this gas are spread over several light-years and can be a million times heavier than our sun.

With a dish 22m in diameter, the view of these gas clouds from Mopra is more than ten times sharper than the best such map astronomers currently have of the southern galactic plane.

Over the past decade, astronomers have been building up an exquisitely detailed picture of where the dust in interstellar space lies using a variety of infrared space-based telescopes.

We know from them where the stars and gas are largely found, but we know little about the detailed distribution of gas and of the activity its clouds are engaged in.

The spectral fingerprints of the gas must be measured at longer wavelengths which requires much larger telescopes, such as Mopra.

We can think of mapping the galaxy in the same way as the early exploration of Australia. Great navigators such as Cook and Flinders drew the outline of a continent through their voyages of discovery around the coast, but were unable to peer within, to gather more than a fleeting glimpse of what it contained.

The primary map we use today showing our galaxy’s molecular gas was made with a telescope just 1m in diameter that began its survey from the roof of Colombia University in the middle of New York City.

That task of revealing the continent inside was left to the inland explorers, such as Stuartand Leichhardt, who forged a path through it, and placed the mountains, deserts and rivers on the map. This is where Mopra comes in.

It produces a view that is an order of magnitude sharper in both angular and spectral resolution, but also includes emission from multiple molecules. With it we are starting to resolve the structures in the gas, to determine how much of it there is, and to see what kinds motions it is undertaking.

The Mopra telescope has been engaged for the past four years in its cartographic survey of the fourth quadrant of our galaxy. This is the sector that cannot be seen from northern skies, but contains the most dynamic parts – its centre and the most active star forming clouds. It’s what we call its delta quadrant; the least explored region of the galaxy.

Mopra’s survey is now two-thirds completed. Some 60 degrees of sky have been mapped along the heart of the galactic plane, and the telescope is working near perfectly.

It is run completely remotely over the internet, with few mechanical problems, and requires only minimal maintenance. As such, no staff are stationed at the telescope, and scientific productivity is high and has been steadily rising from year to year.

Alas, Mopra’s days are numbered. It has fallen victim to the cost cutting taking place within the CSIRO, the telescope’s owner, which has been necessitated by the recent large cuts to that organisation’s budget. The penultimate observing season has just been completed, and there is one year to go.

Unless some external agency can be found to take over and fund the operation of Mopra, the new map of the interstellar gas of our galaxy will remain uncompleted. No other facility elsewhere in the world has the capabilities needed to complete the task.

The telescope survived the raging bushfires that swept across the Warrumbungles in 2013, but can it now survive the accountant’s axe?

Michael Burton is Professor in Physics and Astronomy at UNSW.