One of the closest stars to Earth, Tau Ceti, may host five planets, an international team of astronomers has discovered. 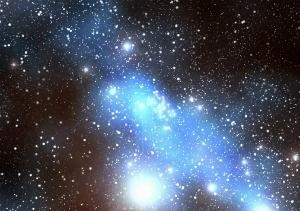 One of the closest stars to Earth, Tau Ceti, may host five planets - with one in the star’s habitable zone  - an international team of astronomers has discovered.

Only 12 light years away, Tau Ceti is the closest single star that  astronomers consider to be like our Sun. It is visible with the naked eye in the evening sky in the constellation Cetus and is currently almost directly overhead after sunset in the Australian sky.

It appears to have five planets estimated to have masses between two and six times the mass of the Earth – making it the lowest-mass planetary system yet detected, the researchers report in a paper published in the journal Astronomy and Astrophysics.

The international team of astronomers, from the UK, Chile, the USA, and Australia, combined more than 6,000 observations from three different instruments and intensively modelled the data. Using new techniques, the team has found a method to detect signals half the size previously thought possible. They say this greatly improves the sensitivity of searches for small planets and suggests that Tau Ceti is not a lone star but has a planetary system.

"The evidence for planets in this system is certainly tantalising”, says Professor Chris Tinney, an astronomer who leads the Exoplanetary Science at UNSW group and is one of six UNSW authors on the paper. Researchers from the Australian Astronomical Observatory and the University of Southern Queensland were also involved.

“It’s certainly a very exciting prospect to gaze into the night sky and see with your own eyes a star so nearby that may host a habitable planet,” says Tinney. “When you consider the vastness of space, they don’t come much closer than this.”

Tau Ceti has featured prominently in science fiction over many years, including the Star Trek series, Dr Who and numerous computer games. In the 1954 novel Caves of Steel, author Isaac Asimov depicted Tau Ceti as humanity’s first settlement place beyond the solar system.

The researchers say  Tau Ceti is so bright and similar to our Sun that it is an ideal benchmark system to test out the new method for the detecting small planets. Its closeness means it may be possible to study the atmospheres of its planets in the future.

Over 800 planets have been discovered orbiting other worlds, but planets in orbit around the nearest Sun-like stars are particularly valuable. Steve Vogt from University of California Santa Cruz said: "This discovery is in keeping with our emerging view that virtually every star has planets, and that the galaxy must have many such potentially habitable Earth-sized planets. They are everywhere, even right next door.”

Read more about the members of the international research team on the Faculty of Science website.