Opinion The palaeolithic diet and the unprovable links to our past

Can we really run the clock backwards and find the optimal way to eat, asks Darren Curnoe. 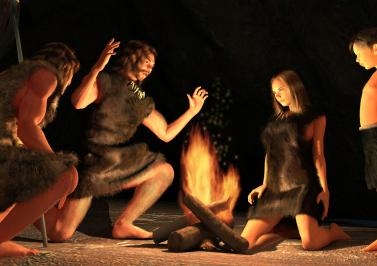 OPINION: We still hear and read a lot about how a diet based on what our Stone Age ancestors ate may be a cure-all for modern ills. But can we really run the clock backwards and find the optimal way to eat? It’s a largely impossible dream based on a set of fallacies about our ancestors.

There are a lot of guides and books on the palaeolithic diet, the origins of which have already been questioned.

It’s all based on an idea that’s been around for decades in anthropology and nutritional science; namely that we might ascribe many of the problems faced by modern society to the shift by our hunter-gatherer ancestors to farming roughly 10,000 years ago.

Many advocates of the palaeolithic diet even claim it’s the only diet compatible with human genetics and contains all the nutrients our bodies apparently evolved to thrive on.

While it has a real appeal, when we dig a little deeper into the science behind it we find the prescription for a palaeolithic diet is little more than a fad and might be dangerous to our health.

Mismatched to the modern world

The basic argument goes something like this: over millions of years natural selection designed humans to live as hunter-gatherers, so we are genetically “mismatched” for the modern urbanised lifestyle, which is very different to how our pre-agricultural ancestors lived.

The idea that our genome isn’t suited to our modern way of life began with a highly influential article by Eaton and Konner published in the New England Journal of Medicine in 1985.

Advocates of the palaeolithic diet, traceable back to Eaton and Konner’s work, have uncritically assumed a gene-culture mismatch has led to a epidemic in “diseases of civilisation”.

Humans are, it’s argued, genetically hunter-gatherers and evolution has been unable to keep pace with the rapid cultural change experienced over the last 10,000 years.

These assumptions are difficult to test or even outright wrong.

What did our Stone Age ancestors eat?

Proponents of the palaeolithic diet mostly claim that science has a good understanding of what our hunter-gatherer ancestors ate.

Let me disavow you of this myth straight away – we don’t – and the further back in time we go the less we know.

What we think we know is based on a mixture of ethnographic studies of recent (historical) foraging groups, reconstructions based on the archaeological and fossil records and more recently, genetic investigations.

We need to be careful because in many cases these historical foragers lived in “marginal” environments that were not of interest to farmers. Some represent people who were farmers but returned to a hunter-gatherer economy while others had a “mixed” economy based on wild-caught foods supplemented by bought (even manufactured) foods.

The archaeological and fossil records are strongly biased towards things that will preserve or fossilise and in places where they will remain buried and undisturbed for thousands of years.

What this all means is we know little about the plant foods and only a little bit more about some of the animals eaten by our Stone Age ancestors.

Many variations in Stone Age lifestyle

Life was tough in the Stone Age, with high infant and maternal mortality and short lifespans. Seasonal shortages in food would have meant that starvation was common and may have been an annual event.

People were very much at the mercy of the natural environment. During the Ice Age, massive climate changes would have resulted in regular dislocations of people and the extinction of whole tribes periodically.

Strict cultural rules would have made very clear the role played by individuals in society, and each group was different according to traditions and their natural environment.

This included gender-specific roles and even rules about what foods you could and couldn’t eat, regardless of their nutritional content or availability.

For advocates of the palaeolithic lifestyle, life at this time is portrayed as a kind of biological paradise, with people living as evolution had designed them to: as genetically predetermined hunter-gatherers fit for their environment.

But when ethnographic records and archaeological sites are studied we find a great deal of variation in the diet and behaviour, including activity levels, of recent foragers.

Our ancestors – and even more recent hunter-gatherers in Australia – exploited foods as they became available each week and every season. They ate a vast range of foods throughout the year.

They were seasonably mobile to take advantage this: recent foraging groups moved camps on average 16 times a year, but within a wide range of two to 60 times a year.

There seems to have been one universal, though: all people ate animal foods. It depended where on the planet you lived: rainforests provided few mammal resources, while the arctic region provided very little else.

Studies show on average about 40% of their diet comprised hunted foods, excluding foods gathered or fished. If we add fishing, it rises to 60%.

Even among arctic people such the Inuit whose diet was entirely animal foods at certain times, geneticists have failed to find any mutations enhancing people’s capacity to survive on such an extreme diet.

Research from anthropology, nutritional science, genetics and even psychology now also shows that our food preferences are partly determined in utero and are mostly established during childhood from cultural preferences within our environment.

The picture is rapidly emerging that genetics play a pretty minor role in determining the specifics of our diet. Our physical and cultural environment mostly determines what we eat.

One of the central themes in any palaeolithic diet is to draw on the arguments that our bodies have not evolved much over the past 10,000 years to adapt to agriculture-based foods sources. This is nonsense.

There is now abundant evidence for widespread genetic change that occurred during the Neolithic or with the beginnings of agriculture.

Large-scale genomic studies have found that more than 70% of protein coding gene variants and around 90% of disease causing variants in living people whose ancestors were agriculturalists arose in the past 5,000 years or so.

Textbook examples include genes associated with lactose intolerance, starch digestion, alcohol metabolism, detoxification of plant food compounds and the metabolism of protein and carbohydrates: all mutations associated with a change in diet.

The regular handling of domesticated animals, and crowded living conditions that eventually exposed people to disease-bearing insects and rodents, led to an assault on our immune system.

It has even been suggested that the light hair, eye and skin colour seen in Europeans may have resulted from a diet poor in vitamin D among early farmers, and the need to produce more of it through increased UV light exposure and absorption.

So again, extensive evidence has emerged that humans have evolved significantly since the Stone Age and continue to do so, despite some uninformed commentators still questioning whether evolution in humans has stalled.

In the end, the choices we make about what to eat should be based on good science, not some fantasy about a lost Stone Age paradise.

In other words, like other areas of preventative medicine, our diet and lifestyle choices should be based on scientific evidence not the latest, and perhaps even harmful, commercial fad.

If there is one clear message from ethnographic studies of recent hunter-gatherers it’s that variation – in lifestyle and diet – was the norm.

There is no single lifestyle or diet that fits all people today or in the past, let alone the genome of our whole species.

Darren Curnoe is a human evolution specialist at UNSW.

Spare your health, budget, and the planet: ditch the paleodiet

Words, genes, and the science of past human deeds