A bizarre, pouched super-predator that terrorised South America millions of years ago had huge sabre-like teeth but its bite was weaker than that of a domestic cat, new research shows. 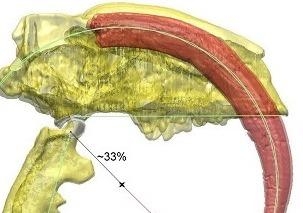 A bizarre, pouched super-predator that terrorised South America millions of years ago had huge sabre-like teeth but its bite was weaker than that of a domestic cat, new research shows.

Australian and American marsupials are among the closest living relatives of the extinct Thylacosmilus atrox, which had tooth roots extending rearwards almost into its small braincase.

“To achieve a kill the animal must have secured and immobilised large prey using its extremely powerful forearms, before inserting the sabre-teeth into the windpipe or major arteries of the neck – a mix of brute force and delicate precision.”

However, Smilodon - a true cat - was just the end point in one of at least five independent ‘experiments’ in sabre-tooth evolution through the Age of Mammals, which spanned some 65 million years.

Thylacosmilus atrox is the best preserved species of one of these evolutionary lines - pouched sabre-tooths that terrorised South America until around 3.5 million years ago.

For its size, its huge canine teeth were larger than those of any other known sabre-tooth.

Smilodon’s killing behaviour has long attracted controversy, but scientists now mostly agree that powerful neck muscles, as well as jaw muscles, played an important role in driving the sabre-teeth into the necks of large prey.

Little was known about the predatory behaviour in the pouched Thylacosmilus.

To shed light on this super-predator mystery, Dr Wroe’s team of Australian and US scientists constructed and compared sophisticated computer models of Smilodon and Thylacosmilus, as well as a living conical-toothed cat, the leopard.

These models were digitally ‘crash-tested’ in simulations of biting and killing behaviour. The results are published in the journal PLoS ONE.

“We found that both sabre-tooth species were similar in possessing weak jaw-muscle-driven bites compared to the leopard, but the mechanical performance of the sabre-tooths skulls showed that they were both well-adapted to resist forces generated by very powerful neck muscles,” says Dr Wroe.

“But compared to the placental Smilodon, Thylacosmilus was even more extreme.”

“Frankly, the jaw muscles of Thylacosmilus were embarrassing. With its jaws wide open this 80-100 kg ‘super-predator’ had a bite less powerful than a domestic cat. On the other hand - its skull easily outperformed that of the placental Smilodon in response to strong forces from hypothetical neck muscles.”

“Bottom line is that the huge sabres of Thylacosmilus were driven home by the neck muscles alone and - because the sabre-teeth were actually quite fragile - this must have been achieved with surprising precision.”

“For Thylacosmilus - and other sabre-tooths - it was all about a quick kill.”

“Big prey are dangerous – even to super-predators – and the faster the kill the less likely it is that the predator will get hurt – or for that matter attract unwanted attention from other predators.”

“It may not have been the smartest of mammalian super-predators – but in terms of specialisation – Thylacosmilus took the already extreme sabre-tooth lifestyle to a whole new level,” says Dr Wroe.