Tall poppies are pick of the crop 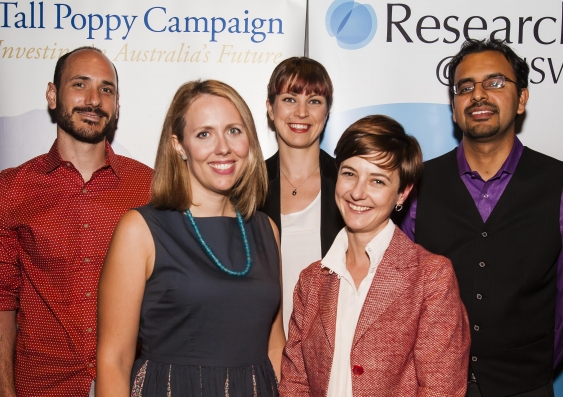 The prestigious awards, presented by the Australian Institute of Policy and Science, celebrate scientific excellence and encourage younger Australians to follow in the footsteps of outstanding achievers.

The winners participate in education and community outreach programs in which they become role models to inspire school students and the broader community about science.

This year’s five winners, who received their awards at a gala event on Thursday evening at the Powerhouse Museum, are all from the UNSW Faculty of Science.

“It is wonderful to see so many up and coming researchers being honoured,” says UNSW Dean of Science, Professor Merlin Crossley.

Dr Julian Berengut, a senior lecturer in the School of Physics, is conducting research to detect variations in the fundamental constants of nature to determine whether the laws of physics change across the universe. He is a member of the cosmological varying constants research team at UNSW that won the 2012 Eureka Prize for Scientific Research.

Dr Jessica Grisham, a senior lecturer in the School of Psychology, studies anxiety disorders, including Obsessive Compulsive Disorder, and has a special interest in the behaviour of hoarding. She also co-established Nerd Nite Sydney, monthly events where people can hear about the latest advances by researchers in a relaxed and fun atmosphere.

Dr Belinda Liddell, a research fellow in the School of Psychology, studies the neurobiological mechanisms of traumatic stress and the mental health of populations that have been involved in conflicts. She has a special interest in the impact of Australia’s immigration policies on the mental health of asylum seekers.

Dr Sarah Perkins, a research fellow in the Climate Change Research Centre, is an expert on Australian climate extremes who studies observed trends in droughts and heatwaves. Her investigations of the effects of natural variability and increased greenhouse gas emissions on climate extremes will help predict the risk of extreme temperatures and bushfires throughout this century.

Dr Neeraj Sharma, a lecturer in the School of Chemistry, is working on the development of the next generation of energy-storing devices such as batteries and fuel cells. He studies the properties of materials that could help produce more powerful devices with lower environmental costs. He is also President of the UNSW Chemical Society.