By collecting water samples up to six kilometres deep, UNSW researchers have shown for the first time the impact of ocean currents on the distribution and abundance of marine micro-organisms. 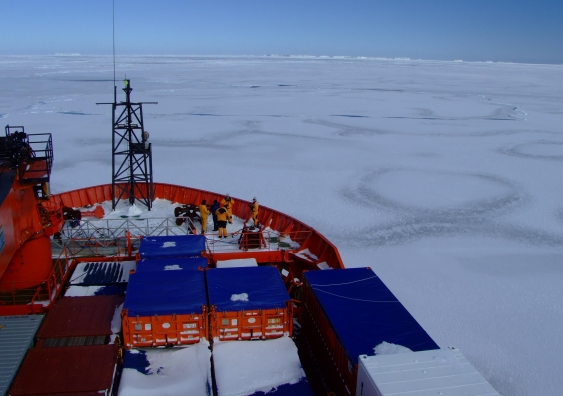 By collecting water samples up to six kilometres deep, UNSW researchers have shown for the first time the impact of ocean currents on the distribution and abundance of marine micro-organisms.

The sampling in the Southern Ocean was the deepest ever undertaken from the Australian icebreaker, RSV Aurora Australis.

Microbes are so tiny they are invisible to the naked eye, but they are vital to sustaining life on earth, producing most of the oxygen we breathe, soaking up carbon dioxide from the atmosphere and recycling nutrients.

“Microbes form the bulk of the biomass in oceans. All the fish, dolphins, whales, sponges and other creatures account for less than 5 per cent of the biomass,” says Professor Rick Cavicchioli, of the UNSW School of Biotechnology and Biomolecular Sciences, and leader of the team.

“Microbes perform roles that nothing else can carry out. And if one critical group of microbes was destroyed, life on the planet would cease to exist.”

The influence of environmental conditions on the make-up of microbial communities in different regions of the ocean has been studied, as has the role of physical barriers in preventing their dispersal.

“Collecting samples in the Southern Ocean was an enormous challenge. But it has meant we were able to carry out the first study showing how physical transport in the ocean on currents can also shape microbial communities,” says Professor Cavicchioli.

The results are published in the journal Nature Communications.

Twenty five samples were collected across a 3000 kilometre stretch of ocean between Antarctica and the southern tip of Western Australia. Sampling depths were determined by temperature, salinity and dissolved oxygen measurements, to ensure microbes were collected from all the distinct water masses of the Southern Ocean.

Genetic sequencing of the microbial DNA in each sample was carried out to characterise the microbial communities in different water-masses. The research shows that communities that are connected by ocean currents are more similar to each other.

“So a microbial community could be very different to one only a few hundred metres away, but closely related to one that is thousands of kilometres away because they are connected by a current,” says Professor Cavicchioli.

“Researchers need to take this into account when they are studying these important micro-organisms.”

The results were tested by Dr Erik Van Sebille, of the UNSW Climate Change Research Centre, who used a computer model of the Southern Ocean to carry out a 100-year long simulation of how particles would move as a result of ocean circulation.

Dr David Wilkins, who carried out the research for his PhD under Professor Cavicchioli’s supervision, is first author on the paper. The team also included UNSW’s Dr Federico Lauro and Dr Stephen Rintoul, of CSIRO.