While Kevin Rudd isn't infallible or a sure winner at the coming election, it will take more than the ICAC recommendations to knock him off his game, writes Marke Rolfe. 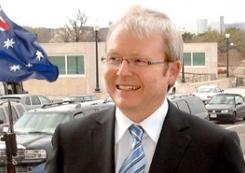 OPINION: “ICAC, SHMY-CAC. My name is Kevin, I’m from Queensland and I’m here to help.”

I know it’s not quite what the prime minister would say: I have taken a little licence with his words from 2007. But I think it sums up how much the current recommendations for prosecutions by the Independent Commission Against Corruption (ICAC) will affect the chances of federal Labor at the upcoming election – not at all. Any effluential by-product attached to NSW Labor by the ICAC recommendations for prosecutions will not be influential on federal Labor.

This is because of the strange career of one Kevin Michael Rudd, the daggy dad who seems to have a measure of “cool”.

The strange thing about Rudd’s return to the prime ministership has been the number of times people adopted the term “sugar hit” in their analyses of him. That term was coupled often with “honeymoon is over”, meaning his glory was gone. Talk about political speed-dating. No sooner was Rudd back and people were writing off Labor’s chances. They were the ones in need of more sugar, not Labor.

There was always something stubborn in the regard for the man held by so many for so many years. It could not be shifted by Labor under Gillard and wasn’t going to be consumed by one sugar hit. Nor easily dislodged by ICAC.

Few Laborites could not have contemplated a few weeks ago their party being in its current and consistent position. That achievement is beyond shallow depictions like “sugar hit” or “honeymoon is over”. The trend of opinion is there over a few weeks and across numerous polls. Sure, some put the two-party preferred vote as 50-50 between the ALP and the Coalition or 49-51 to the latter in the latest Essential Media poll, but their differences are within the margins of error of these polls.

Furthermore, these are national measures. The more important measures are of opinions in the states. These are what the parties will be closely following since national aggregates break down into more focused ideas of attitudes. But one thing is so far clear in this regard: that Rudd put back into play states and seats where Labor was not going to try very hard and was saving resources for elsewhere with the objective of saving as much furniture as possible.

Now Labor can force the Coalition to a contest across the country and to spend money where they would not have had to before. The Coalition is also forced to a marginal seat campaign which is harder for them. Both sides have experience in this form of political trench warfare. There are Liberal seats like Hasluck in Western Australia (on 0.6%), Boothby in South Australia (also on 0.6%), and Brisbane (1.1%) and Forde(1.6%) in Queensland that now have to be fiercely defended.

Western Australia has been such a difficult proposition for Labor over several elections now that it was really a lost cause before Rudd returned. Similarly, he has put Queensland back into play simply because he is from that state and is not Julia Gillard.

With Gillard in charge, parochialism was warming the swinging arms and the baseball bats north of the border to bash all sitting members except one – Rudd. So any stench from NSW Labor is unlikely to have an effect up north since so many blame the so-called factional “faceless men” for Rudd’s deposal as leader in 2010.

That seems to be the opinion of so many beyond that state as well, including the revered area of western Sydney which is seen as crucial. One need only remember Gillard’s attempted tour there and the injunction of her ally Laurie Ferguson to fix the asylum seeker problem because of opinion in that area.

To put it another way, Rudd has put NSW also back into play, the very state where the stench is strongest. Despite the seeming paradox, he can be portrayed as a victim of the very branch that may seem so awful to so many.

To make sure of such a distinction he made a public announcement and made public a letter on July 4 to the general secretary of the NSW ALP branch, Sam Dastyari, sayinghe was “appalled by the allegations of corruption” and advocated national intervention to pursue reforms that are claimed to empower members and limit those despised faceless men. Rudd’s immediate reaction to the ICAC recommendations for prosecutions was to express his “disgust” at the allegations.

Aside from Rudd’s recent reform of the election of the federal parliamentary leader (half by members, half by the federal caucus), there are other proposals for an independent ombudsman, a charter of rights and responsibilities, and primaries involving the election of candidates by members and non-members. He is taking up one of the recommendations of the 2010 report into the ALP by party elders Bob Carr, Steve Bracks and John Faulkner.

It must be said, however, that the attempts and plays of such reforms in the future are still to be reckoned with. For a start, although the members have the right to take legal action against breaches of party rules, there are complaints that only 50% of the administrative committee in charge of those rules is elected by members while the unions control the other half.

Boxer Sugar Ray Robinson was renowned for coming back at his opponents and never giving up. He is a more apt analogy to Rudd than any idea of sugar hits. This is not to say that Rudd is infallible or a sure winner come the election. However, it will take more than ICAC recommendations or a couple of weeks of reporting to knock Rudd off his game.

Mark Rolfe is a Lecturer in the School of Social Sciences at UNSW.