ABBA, Queen and Coldplay are the new Bach, Beethoven and Mozart

Bohemian Rhapsody by Queen received the highest number of nominations for great pieces of music in a study involving UNSW. 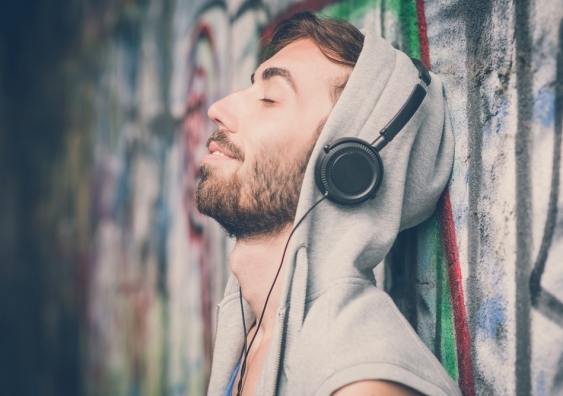 ABBA and Whitney Houston have now joined the great masters of music such as Bach and Mozart. Credit: Shutterstock

Whitney Houston, Coldplay and ABBA should be added to the list of great masters of music such as Bach, Beethoven and Mozart, according to a study involving UNSW.

Researchers from UNSW, Curtin University and Roehampton University in the UK surveyed 172 participants for the study.

The mix of music and non-music students were asked to nominate their favourite and least liked pieces of music, as well as ones they thought were great.

“While controversial some decades ago, we now have evidence that the Beatles should be added to the list of greats.

“Perhaps more surprising are recommendations that ABBA, Queen, Coldplay and Whitney Houston have now joined these great masters of music.”

Professor Schubert said the findings showed that the undisputed champions of music, Bach, Beethoven and Mozart, were never disliked by the participants.

But some of the new contenders, Queen and Coldplay, were sometimes disliked.

Bohemian Rhapsody by Queen received the highest number of nominations for great pieces of music.

Other nominated great pieces of music included Claude Debussy’s Clair de Lune and My Heart Will Go On by Celine Dion.

But My Heart Will Go On and Bohemian Rhapsody were sometimes disliked. 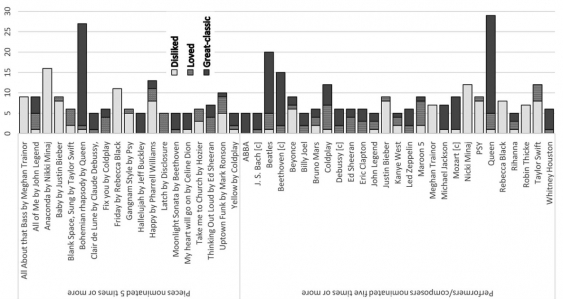 The count of most frequently selected pieces and performers/composers from the study.

Friday by Rebecca Black received the highest number of nominations for disliked piece of music, followed by Happy by Pharrell Williams, Gangnam Style by Psy and Uptown Funk by Mark Ronson.

But Gangnam Style, Happy and Uptown Funk were sometimes loved, with the Mark Ronson song even considered a great classic song by some.

The artists considered the greatest were Queen, followed by the Beatles, then Beethoven and Coldplay, while Nicki Minaj received the most nominations for disliked artist, followed by PSY, Justin Bieber, Rebecca Black and Taylor Swift.

The researchers were attempting to define an aesthetic experience of music in the study.

Word frequency analysis of the responses suggested that disliked music evoked nonaesthetic experiences because strong, negative terms were felt, such as frustration, anger, irritation and annoyance.

Aesthetic experiences, on the other hand, drew a range of responses about the music; beauty, fun, happiness, hope, joy, love and sadness, while evoking feelings of calm, happiness, nostalgia, power and sadness.

“From this study we have defined an aesthetic experience of music as the contemplation of objects or situations expressing (usually) beauty, which also motivates you to listen to music, inducing pleasure and giving the listener a buzz or high,” Professor Schubert said.

The results of the Empirical Test of Aesthetic Experience Using the Affect-Space Framework study have been published in the Psychomusicology: Music, Mind, and Brain journal.