Opinion Abbott’s belligerence: putting in the boot or kicking himself?

Tony Abbott’s interview with the Washington Post has revived his problem of loose lips - but this time on the international stage, writes Mark Rolfe. 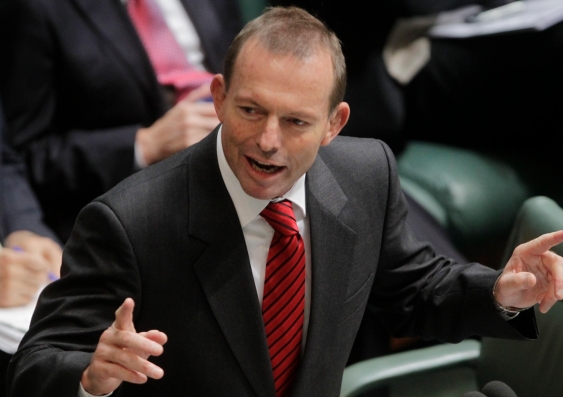 OPINION: The words won’t rank with the oratorical flourishes of great leaders but I can’t remember Churchill or Roosevelt describing anybody as “wacko”. When prime minister Tony Abbott uttered this word in an interview with the Washington Post on the weekend, it was clear he wished to plant one of his partisan boots in the soft, nether regions of his opponents.

To wit, Abbott answered a question about the National Broadband Network fibre to the premises plan with:

Welcome to the wonderful, wacko world of the former government.

Abbott replied to the question about the former government “doing a lot of things that were bad for the country” with:

I thought it was the most incompetent and untrustworthy government in modern Australian history.

Such language made American political scientist Norman Ornstein “wince”. Ornstein is not a left-wing Abbott-hater from the inner west of Sydney, but an American from the profoundly right-wing American Enterprise Institute and one of the world’s leading foreign policy thinkers.

So, we’re dealing with the old Abbott problem of loose lips but now on the international stage.

The lesson Abbott took from the last three years is that fierce partisan politics works with voters. Certainly, many voters were considerably peeved by the major parties. But when Abbott could get a word in between Labor’s frequent shots in the foot, he was taking those tainted tootsies and shoving them in the voters’ faces.

Any prime minister will want to bash the opposition, especially in the first year when the sins of that previous government are fresh in voter’s minds. But that has to be balanced with a certain decorum associated with the office and with what is publicly and politically acceptable. Ornstein outlined one aspect of that:

It really does violate a basic principle of diplomacy to drag in your domestic politics when you go abroad. It certainly can’t help in building a bond of any sort with President Obama to rip into a party, government and - at least implicitly - leader, with whom Obama has worked so closely. Perhaps you can chalk it up to a rookie mistake. But it is a pretty big one.

Australia’s leaders don’t want to involve other countries' leaders in our domestic politics while overseas anyway. Former Queensland premier Joh Bjelke-Petersen did this in 1987: while visiting Japan he attacked the Hawke government.

Political leaders abide by what is known as the London Convention of not talking about domestic politics while on foreign policy business. This was invented by Bob Hawke in the late 1980s when he was getting hassled while overseas by Australian reporters about domestic politics, in particular the problems created by Paul Keating.

When Keating was prime minister, however, he didn’t think much of the convention.

Ironically enough, Abbott reminds me of Keating in the similar partisan aggression which can make black into white and white into black, depending on the occasion. Importantly, Keating’s tongue was not only his greatest weapon, cutting through public opinion with clear messages as well as ridiculing opponents, but also his greatest vulnerability. The verbal aggression gradually alienated enough people over time to rebound upon him in 1996.

Admittedly, Abbott’s Washington Post interview was conducted in Australia, so it wasn’t subject to some of the expectations outlined above.

And let’s not forget this is a transition period for him, as it was no more or less than for Julia Gillard and John Howard who weren’t considered foreign affairs “wonks” upon becoming prime minister. And they adjusted.

Yet Abbott has a reputation for loose lips that was only boxed up by the singular focus of opposition and cannot be so easily constrained by executive office. One need only remember his public belligerence in calling asbestos campaigner Bernie Banton’s petition a “stunt” and his admission that:

Abbott learnt the lesson that partisan belligerence works and also that his personal belligerence can get the better of him. But this could also be a style of government that he encourages, particularly when it is on shaky ground but believing that attack is the best form of defence.

So far in the Coalition’s short period in office, we have witnessed: environment minister Greg Hunt get aggressive with a reporter from the BBC World Service; health minister Peter Dutton defend Abbott’s Washington Post interview; and immigration minister Scott Morrison aggressively defend his use of the term “illegals”, incorrectly citing it as warranted by the international legal definition and attacking “politically correct language”.

Abbott has played domestic politics while in opposition and sought to smooth over international relations after being elected, as if both sides of politics here were responsible for the damage. Earlier this month he apologised to Malaysian prime minister Najib Razak for dragging his country into the asylum seeker debate, explaining that in Australia, “we play our politics very hard”.

This followed an apology to Indonesian president Susilo Bambang Yudhoyono that Australia should have “said less and done more” about asylum seekers passing through Indonesia to get to Australia.

With Abbott’s belligerence goes a lot of hide. But there’s also the very real possibility he will alienate a lot of people over a fairly limited time, as did Keating. After all, belligerence can leave voters with perceptions of ridiculous stubbornness or humiliating backdown.

Dr Mark Rolfe is a Senior Lecturer in UNSW's School of Social Sciences.