Opinion All in the game: the weird world of Craig Thomson

Craig Thomson has been playing the media game all along, including his statement to parliment yesterday, writes Mark Rolfe. 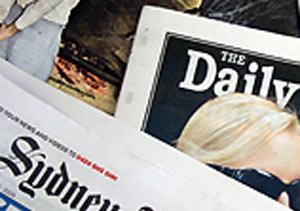 OPINION: The ALP and the union movement have never liked scabs. But yesterday we witnessed a labour scab of a different sort as The Wound Formally Known As Craig Thomson continued to be bleed rather than heal. Yesterday during Thomson’s statement to parliament, nobody was really expecting convincing evidence…

We’ve had a glimpse into the world of Craig Thomson, but he’s trying to justify a view that no one outside the political game can understand.

The ALP and the union movement have never liked scabs. But yesterday we witnessed a labour scab of a different sort as The Wound Formally Known As Craig Thomson continued to be bleed rather than heal.

Yesterday during Thomson’s statement to parliament, nobody was really expecting convincing evidence of a conspiracy against him. Instead, we were asked to enter Craig’s world – the land of bitter political struggle and the political line of thinking.

Aggrieved and bewildered, Thomson pointed the finger at Michael Williamson, Kathy Jackson and Marco Bolano, all officials of the Health Services Union. The media, Fair Work Australia and Tony Abbott all copped a spray.

Amidst all this, a question goes begging: why were ordinary union members not mentioned yesterday? Where was Thomson’s concern for them? They would not have been impressed by his description of the consistent misuse of expenses by all these officials.

Rather than think of the rank and file of the union, Thomson was too busy fighting other players of the political game. And yesterday’s glimpse into Craig’s world showed us how differently those immersed in it think about the game and how it’s played.

The case for conspiracy

Thomson’s statement showed him to be a man lost in politics, lashing at enemies with the usual tactics of push and shove because that’s how the game has been for him and others in this sorry little saga.

Thomson’s case about conspiracy was at best circumstantial and at worst composed of the kind of supposition that political players often make about enemy moves and intentions, even if it was more outlandish than usual. He expects us to believe this line of thinking, when we are actually incredulous at his story.

The Health Services Union has been decidedly unhealthy for more than 12 years. Thomson has been in the thick of it and has thrived in the melees, beginning with victory in 2002 in a struggle that involved allegations of defamation and gross misbehaviour. Why would Williamson be trying to destroy Thomson at the same time that he was supporting Thomson’s federal election campaign in 2007 and 2010 with election funds subject to an AEC investigation?

Allegedly, Williamson was not only threatening to destroy his erstwhile ally Thomson but also making exactly the same threat against Bolano last November. And Bolano, according to Thomson, threatened him. And, as we know, Jackson has been making allegations against Williamson.

This is a Mexican shootout with everyone aiming at everyone else.

Lost in the game

We know that Thomson’s head was lost in the political ether because he was, he told us, the object of threats that were a “routine" part of “working in this environment”, that is, within the HSU.

We know that Thomson’s head was lost in the political game because he damned Jackson for addressing the H.R. Nicholls Society. This organisation led the economic rationalist charge in the 1980s and 90s and, consequently, is a fierce antagonist of unions. Within Labor, this is the equivalent of a lay-down misere charge of consorting with the ideological enemy and that is how Thomson expected it to be received. It was obvious to him; but why should anyone in the public care?

True to form for a head in the political ether, he blamed the media. He accused some journalists of being commentators and participants and was visibly upset at what must have been abominable intrusions upon his family.

But Thomson has been playing the media game all along. Some nine days ago, he gave an interview to Laurie Oakes without any concern for his party. The government needed clear air for the budget message to get to the public. Instead Thomson polluted the good news because he was concerned for himself.

In the same vein, he promised to give evidence today of the conspiracy against him but provided nothing new and, furthermore, gave advanced notice to the Telegraph where he blamed Graham Richardson for the usual behind-the-scenes moves that happen in this game.

He claimed to have wanted nothing more than give his side after some four years of waiting for the Fair Work Australia case to be investigated. But he has ducked and weaved between the different institutional requirements and rules of Fair Work Australia and the Australian Electoral Commission in his pursuit of both political and legal objectives. And the media has been part of it.

Thomson has advanced himself by playing the game of politics. Admittedly it isn’t always as brutal as the HSU version but it is a different game to the one most of us know. Now he expects the rest of us outside this peculiar game to understand his predicament, to reconcile two different codes of behaviour, but he is stunned to find an incredulous reception.

Rather than present fresh evidence, Thomson attempted to rehabilitate his reputation by co-opting the public into a game they prefer to avoid but in which he thrived and has paid a price.

To Thomson, everyone within the internal political game has been playing pass the parcel on this issue, except the music has stopped and Craig the one left holding it.

It’s the same game with the current fight in NSW Liberals which is spilling into the public square. For all the po-faced reactions of Abbott & co., we know they’d adopt Labor’s same arguments if in the same position. This is just the adversarial nature of the political game.

Before, we were not privy to these games. Paul Keating’s pre-selection battles for a seat in parliament where boxes of ballots seemed to go missing was not a national news story. Unfortunately, now we have the harsh lights of the 24/7 instant media which will expose lots of matters and details that were once kept in the corners of society. It gives us the illusion of knowing all, including the characters we see so often on our screens. But we don’t. We aren’t participants in that game.

And all that’s left in Thomson’s wake is Labor twisting in the political breeze.

Mark Rolfe is a lecturer in the School of Social Sciences and International Studies.

Can Rudd reform NSW Labor? And will it save him?