The viability of Australia’s strategy to sustain good relations with India and China has been debated in a public lecture by security expert, Rory Medcalf. 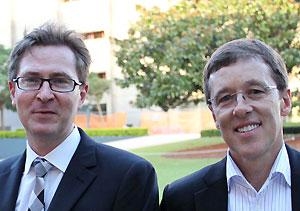 Director of the International Security program at the Lowy Institute, Rory Medcalf, has used a UNSW public lecture to debate the viability of Australia’s strategy to sustain good relations with India and China.

Medcalf, who is also Senior Research Fellow, Indian Strategic Affairs in UNSW’s School of Social Sciences, says Canberra has intensified diplomatic engagement and economic enmeshment with both powers, yet is also seeking to hedge against uncertainties surrounding Chinese power. This involves strengthening Australia's defence posture, enhancing the U.S alliance and forging new ties with other Asian partners including India. Yet there are serious questions about the viability of such a strategy, or Australia’s capacity to make it work.

"I would argue that the rudiments of a strategy are becoming clear, and each of our last few prime ministers – including the present one – can take some credit," Medcalf said. "But big questions remain over how coherent, sustained, or effective this approach will be, in a country prone to short-term thinking and, these days, policy paralysis."

China and India are principal markets for Australia’s resources, major sources of human capital, and critical strategic players in the region but Medcalfe questioned how Australia will balance the economic benefits of the two Asian giants with security anxieties over their growing military power and differing values.

"An ideal Australian strategy in the Indo-Pacific Asian century would be to give China, India and the United States all grand stakes in this country’s own prosperity and security," said Medcalf.

The lecture was introduced by Professor Alan DuPont, Director of UNSW's new Institute for International Security and Development as part of the Faculty of Arts and Social Science SoWhat? lecture series.

Listen to the podcast here.

Australia has much at stake in South China Sea reef dispute