Opinion Burn after reading: a short history of arson

Modern-day incendiarism draws on a long tradition of insurrection and continues to capture the public imagination, writes Gemma Clark. 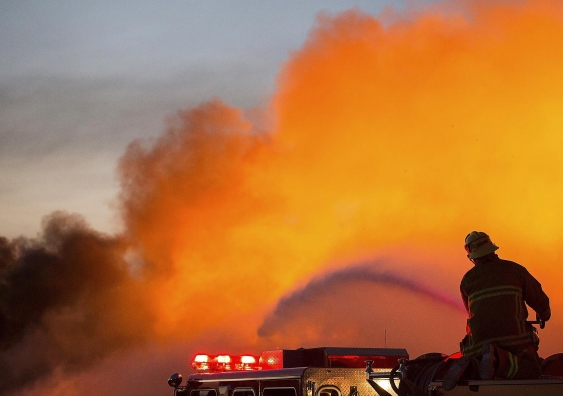 OPINION: We’ve been burning things for hundreds of thousands of years.

Australian Aboriginals practised fire-stick farming to regenerate the soil and drive out animals for hunting. Yet manmade fires not only enable our use of the earth: burning also defines human relationships. And, for centuries, we’ve used fire maliciously to destroy what doesn’t belong to us.

Wilfully setting fire to property, with the intent to cause damage, is a crime – arson.

Under British law, in the early 19th century, setting fire to domestic and commercial premises, and “any stack of corn, grain, pulse, straw, hay or wood”, was punishable by death. Stack-burning was removed from the list of capital crimes in 1837, but arson remained a serious offence that could incur a life sentence or transportation.

Late-19th and early-20th century societies were less concerned with property damage than they were about crimes against the person.

Industrialisation and urbanisation – people living together in close quarters in cities – raised new fears about murder and assault. But while punishments for arson have become less severe over time, fire-starting still captures the public imagination and challenges the authorities.

During the 2011 England riots, the actions of a small group of arsonists quickly turned local disorder into a matter of national security. Images of London high streets ablaze evoked scenes from the Blitz on the capital during the second world war.

A panel reported on the England riots. Indeed we often study arsonists’ behaviour, in the hope of preventing it. Psychiatrists and criminologists say people start fires for excitement, profit, to take revenge, as cover-up for other crimes and because of mental illness.

By examining arson’s history, we add another motivating factor to this list. Arson has evolved, since the 18th century, from a wrongful individual act into an effective means of collective violence, too.

From 1750, the privatisation of common land in England limited peasants’ access to resources such as firewood and game. In defiance of the law, the rural poor burned the newly “enclosed” forests and deer parks.

From the 1790s, in Britain and around the world, arson became an increasingly frequent weapon of rural protest. Burnings peaked during poor harvests and in areas of high unemployment.

Cars and buildings burn into the evening in Ferguson, US, on November 24 2014, after news emerged that a grand jury had decided not to indict the police officer who shot local teen Michael Brown.

Arson is very accessible. Fire setting requires little effort and few tools. The invention of the Lucifer match, in 1829, was timed perfectly for the “Swing riots” of 1830. During that violent year, fire engulfed eastern English counties in which labourers were paid low wages.

Arsonists’ techniques have changed little in modern times. In rural Ireland in the 1820s, peasant gangs vented their frustration at high food prices and unfair taxation (tithes) by burning the property of rich farmers and authority figures.

Using kettles, the so-called “Rockites” carried smouldering lumps of coal or turf across fields to the homes of their enemies, placing these basic incendiary devices in the thatched roofs common to rural Ireland.

Visible from up to 40 miles away, according to one English study, arson also creates a frightening public spectacle. Having learnt at a young age that fire can hurt us and destroy our home, arson scares people into compliance with communal demands.

Arson forced land redistribution and drove out minorities, namely Protestants and those loyal to the old regime.

Arson is often integral to religious and interracial conflict. Here the symbolism of arson is important. Fire not only destroys property, but can also render unrecognisable signs of life, “purifying” a community of its enemy.

In America’s East St Louis, in 1917, house burning played a key role in protests by white mobs against mass migration of southern blacks into wartime factory jobs. Arson also served genocidal aims during the war in the former Yugoslavia, 1992-95.

These street activists aren’t conventional arsonists. The primary purpose of a Molotov cocktail is to set the target ablaze, rather than wholly destroy it.

But modern-day incendiarism clearly draws on a long tradition of insurrection through malicious damage. From 18th century rural England to 1980s Greece via Reconstruction-era southern America and colonial Africa, incendiarism as protest has been a recurring, global phenomenon.

Gemma Clark is a postdoctoral research fellow at UNSW.