A project run through UNSW Matraville Education Partnership becomes a proof of concept for the national Know Your Country campaign. 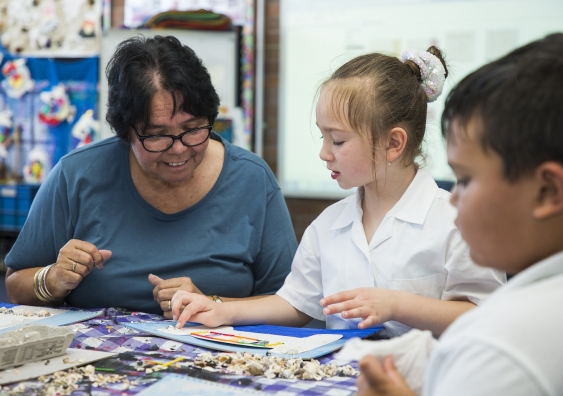 When World Vision was developing a policy to put First Nations Cultural Educators in every school, the team happened upon a radio broadcast about the UNSW Matraville Education Partnership Cultural Residents Project. The project aims to demonstrate the benefits of employing local First Nations cultural educators in schools to improve the teaching of Indigenous perspectives.

The Cultural Residents Project was already doing locally what World Vision was proposing on a national scale, providing an existing proof of concept for the Know Your Country campaign. The campaign has been convened by World Vision and is supported by a range of First Nations and ally organisations. Its policy goal is to get federal, state and territory education ministers to agree to fund all public and private primary schools to employ a locally approved First Nations Cultural Resident.

“Teachers genuinely want to deliver the Indigenous content mandated in the curriculum, but they often lack the knowledge, skills and confidence to embed it in their teaching.

“We need change like this. And Australians support change. In our research, 74 per cent of our survey respondents said they believe education is important in reducing racism, and 62 per cent agreed the government should do more to reduce racism in the education system.

“Teachers genuinely want to deliver the Indigenous content mandated in the curriculum, but they often lack the knowledge, skills and confidence to embed it in their teaching. This is reinforced in the literature and in the extensive consultation process behind the policy work underpinning the Know Your Country campaign.”

“The concept of this project – and its previous iteration, the Culture, Community and Curriculum Project – is to have a Cultural Resident become a mainstay of Australian education. Basically, it maintains that an Australian school isn’t complete without a Cultural Resident – it’s just like you would expect a school to have a principal, a gymnasium or a maths program,” she says.

Deep and sustained community engagement and relationships with Aboriginal community members are key to the project, according to Ms Thompson.

What is the Cultural Residents Project?

The Australian Professional Standards for Teachers mandate that all teachers should have an understanding of Aboriginal and Torres Strait Islander histories and cultures. Currently, Indigenous content is distributed across key learning areas (KLAs) in the school curriculum. The question is: how do teachers meaningfully engage with the Indigenous content specified in the curriculum and how effectively are students learning about Indigenous knowledges and perspectives?

“Just like we learn about other histories and cultures in school, it’s time for all teachers and children to get a better understanding of Aboriginal history and cultures,” Aunty Maxine says.

Between 2016 and 2018, UNSW Matraville Education Partnership piloted a program which saw local Aboriginal community members co-teaching in classrooms across five schools in Sydney’s eastern suburbs. The pilot evolved into the Cultural Residents Project, which employs Aunty Maxine Ryan – a local Dharawal woman from La Perouse – to work in four schools in the area.

“Just like we learn about other histories and cultures in school, it’s time for all teachers and children to get a better understanding of Aboriginal history and cultures,” Aunty Maxine says.

“The kids love learning about it, particularly when we do hands-on activities like art and cooking. They’re interested in how our lifestyles have changed, in how Aboriginal people lived off the land and what was available to them. I’m also there to teach them to look after the land – and the sea – because that’s what keeps us alive.”

Dr Rose Amazan at UNSW School of Education, researcher with the Cultural Residents Project, says this project differs from the pilot.

“It’s targeting local schools with less connection historically to the Indigenous community and with fewer Indigenous students. Many of the teachers aren’t Indigenous and many don't have experience teaching Indigenous content. They’re uncomfortable about how they engage with and teach the Indigenous cross-curriculum content – and how they do it well,” she says.

Cultural Residents like Aunty Maxine are employed for three years at a level commensurate with teaching staff, in recognition of the value of their knowledge and their role. Two days a week across several terms, they work collaboratively with classroom teachers to plan, implement, document and evaluate the integration of Indigenous knowledges and cultures across the curriculum. The Aboriginal Education Consultative Group (AECG) is consulted at every level.

Aunty Maxine says she finds teachers are grateful for her support.

“They feel comfortable asking me for help with the children’s questions that they can’t answer. I tell them I don’t know everything, but I’ll always phone an Elder or a Land Council, or connect to someone who can find the answer.”

“If teachers have the confidence to teach Indigenous content, and engage with it at a very authentic level, that will make a difference to the students.

Dr Amazan says evidence shows that teachers have great impact on students, so the project looks at changing teacher practice.

As part of the project, the whole school undertakes professional learning to ensure everyone is aware of the role of the Cultural Residents and is participating in the process.

The researchers will also generate a toolkit for how schools engage with their local communities, including a step-by-step guide to a successful partnership.

While the three-year project was hampered by the COVID pandemic and lockdowns in 2020, this year, researchers have been collecting evidence around the project’s impact. They have organised teacher and principal interviews, surveys and focus groups as well as receiving anecdotal parent feedback.

“Parents have been informed and included through parent-teacher nights,” Dr Amazan says. “Some are keen to be involved in the continuing discussion the students are having with Aunty Maxine and some have sent letters praising the program and the teachers. Some schools want to hire a Cultural Resident to continue the work – because our funding can’t do that.

“We also talk about having a strategic plan for embedding Indigenous perspectives in their school curriculum. So, it's not just about Aunty Maxine coming in for two terms and leaving, it’s about sustainability.”