Dogged democracy: on the tail of a Greek anti-austerity hero 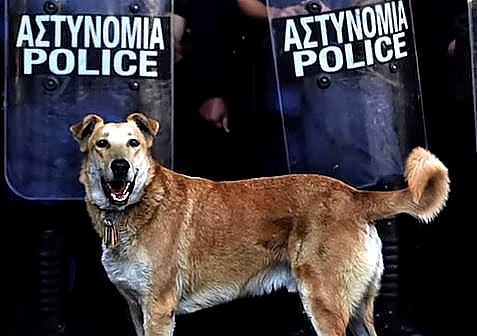 When the jaded people of Athens took to the streets to protest austerity in 2011, an unlikely leader emerged, standing fearlessly before riot police and galvanising a city.

Loukanikos, one of countless stray dogs that roam the streets of the Greek capital, became such a symbol of the Eurozone crisis he was nominated for Time magazine’s Person of the Year in 2011.

Today, UNSW’s Dr Mary Zournazi explores the mythology of Athens’ legendary protest pup in a documentary for ABC Radio National exploring how a dog can become a symbol of the people.

Mary Zournazi takes us on her search for Loukanikos, a stray dog who became the symbol of Greece’s anti – austerity movement. It’s a story about hope and one very special dog.

“In a way the dogs represent the vulnerability of Greece and what they are going through, the dogs are the most vulnerable in the community and people can identify with them", said Zournazi, a leading writer and documentary maker with the School of Social Sciences.

'It's a story begging to be told'.

Narrated by actor Lex Marinos, this piece is part of a broader research project on austerity and a film documentary Dr Zournazi is working on titled the ”Dogs of Democracy”, which builds on her earlier work on hope and peace including the acclaimed “Inventing Peace” project with Oscar nominated German Film Director Wim Wenders.

Read more about Zournazi's collaboration with Wenders in UNSW magazine – Uniken and at the Inventing Peace website.

Vital Signs: Italy is broke, and the markets have lost all faith in its elected politicians

Release the hounds: democracy dogs are off the leash