Mahatma Gandhi’s granddaughter has called for a focus on moral education to counter violence in society. 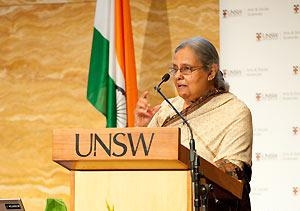 Mahatma Gandhi’s granddaughter has called for a focus on moral education to counter violence in society.

Peace activist Ela Gandhi told a capacity audience at UNSW’s Leighton Hall that the first seven years of a child's life is the most critical time to learn the core values of respect, compassion, love and community.

“The education system is producing highly skilled people but it is not producing good human beings,” she said. “There needs to be changes to the school curriculum so that young people are learning about non-violent communication in their early years and through to their tertiary education.”

Gandhi was visiting Australia for the first time to set up the Sydney branch of the South-Africa based International Centre for Non-Violence. Her lecture was part of UNSW’s Faculty of Arts and Social Sciences So, What? Public Lecture series.

She said the centre aims to examine education "as a way of transforming the community".

“Something needs to be corrected in our system which is giving rise to the growing culture of crime, corruption, consumerism, selfishness of people and exploitation of nature,” said Gandhi, who spent nine years under house arrest during South Africa's struggle against apartheid.

She believes Mahatama Gandhi, who was assassinated sixty-five years ago, would be “saddened” by the violence in today’s society. “I think he would be sad but his nature was such that he would have tackled the problem. He was a realist and a strategist and he would have considered the causes and changed things around.”

She said the most important value her grandfather taught her was to seek the truth. “To him, learning to be critical and questioning was the best way to pursue truth.”

Ela Gandhi is an author and recipient of numerous prestigious awards for her work in promoting nonviolent political change. She is a former Chancellor of the Durban University of Technology, and member of the South African parliament where she was aligned with the ANC. Ela Gandhi is currently Honourable International President of the World Conference on Religions for Peace, and Vice chairperson of the International Centre of Nonviolence, South Africa.

The So, What? Public Lecture series aims to challenge and inform public debate and understanding by pushing the boundaries of academic discourse.